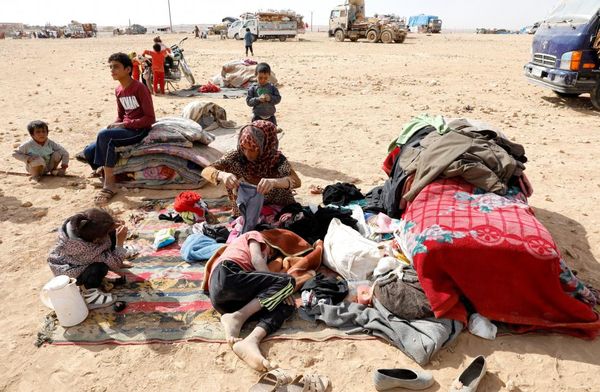 I’m from Somalia where there has been a war going on for my entire life. I grew up with a lot of horror in the backdrop – a lot of terrible things that have happened to people who are really close to me, and to my country, and to my parents; so it’s in the home and it’s even in you, it’s on your skin and it’s in your memories and your childhood. And my relatives and my friends and my mother’s friends have experienced things that you can’t imagine, and they’ve put on this jacket of resiliency and a dark humour. But you don’t know what they’ve been victims of, or what they’ve done to other people. Them being able to tell me, and then me writing it, it’s cathartic, being able to share their stories, even if it is something really terrible, something really tragic. Sometimes I’m telling other people’s stories to remove stigma and taboo, so that they don’t have to feel ashamed; sometimes you use yourself as an example.

when you see the whole city
running as well.

your neighbours running faster
than you
breath bloody in their throats
the boy you went to school with
who kissed you dizzy behind the old tin factory
is holding a gun bigger than his body,
you only leave home
when home won't let you stay.

no one would leave home unless home chases you
fire under feet,
hot blood in your belly
and even then you carried the anthem under
your breath
only tearing up your passport in an airport toilet
sobbing as each mouthful of paper
made it clear that you would not be going back.

you have to understand,
that no one puts their children in a boat
unless the sea is safer than the land
no one burns their palms
under trains
beneath carriages
no one spends days and nights in the gall bladder of a truck
feeding on newspaper unless the miles travelled
means something more than journey
no one crawls under fences
wants to be beaten
wants to be pitied

no one chooses refugee camps
or strip searches where your
body is left aching
or prison,
because prison is safer
than a city of fire
and one prison guard
in the night

the
go home blacks
refugees
dirty immigrants
asylum seekers
sucking our country dry
...with their hands out
they smell strange
savage
messed up their own country and now they want
to mess ours
how do the words
dirty looks
roll off your backs
maybe because the blow is softer
than a limb torn off

or the words are more tender
than fourteen men between
your legs
or the insults are easier
to swallow
than rubble
than bone
than your child’s body
in pieces.
i want to go home,
but home is the mouth of a shark
home is the barrel of a gun
and no one would leave home
unless home chased you to the shore
unless home told you
to quicken your legs
leave your clothes behind

no one leaves home unless home is a sweaty voice in
your ear
saying-
leave,
run away from me now
i don’t know what i’ve become
but i know that anywhere
is safer than here