Two Halves of the Moon 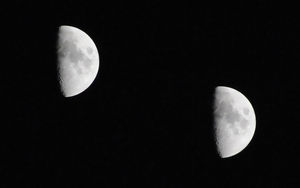 Like a Slope Point tree in Southland, a tree, windblown on the Arctic side, tinged with sea-salty rust, retreats ever inwards in the wild and briary glebe of the clergy house. It is the calm before another winter storm on this side of the world. Little penguin-like auks have been blown off course by the tempest of last week and are now regaining their energy in Noah’s Ark – the local animal rehoming centre. Rivers burst their banks, the turbulent waters ravaged homes, leaving silt and rainbow trout in their wake.

An Epiphany sun shone for an hour or so today. And my eye was drawn to wandering dolphins and orcas in the Firth and a weather-beaten fisherman hauling lobster creels onto his rusty fishing boat. There aren’t many lobsters about at the moment. The gourmands, dining in London restaurants, will have to do with monkfish.

Meanwhile, the people of the besieged Syrian town of Madaya, weep, as food finally reaches them. Starvation is used as a weapon of war in a conflict that grows more desperate with every moment. Prayers beam eastwards.

After Christmas, clergy need to drift away from the collage of parish life. I washed up on the Ardnamurchan Peninsula, a remote and wild place in the Western Highlands of Scotland. The landscape tells a harsh, sometimes violent, often sad story…of volcano fires, blood-soaked battles, the religious fervour of Irish monks, rampaging Viking invaders and Highland Clearances.

Like Alice Through the Looking Glass, it was as if I had entered a wormhole, travelling through a mirrored world of scarred mountain rifts, moine rocks, fossils and rainfall, to the vanished world of Central Otago.

Tramping in the Sunart rainforest, green with lichens, mosses and liverworts growing from bark and branch, I came across a clearing and a timber house, called Kaikoura  - MÄori for ‘meal of crayfish’.

At land’s end, the most westerly point on the peninsula, stood the only Egyptian-style lighthouse in the world, with figurines of pharaohs, gods and sphinxes decorating the lamp base.  In the fading light of a winter’s day, the Atlantic Ocean hurled itself at the beacon, biting pieces off the rocks.

I watched an unfolding ferocity that only the gods could have summoned. It was a night when the light would be needed most and I imagined that it beamed across the waters to Dusky Sound.

Back home in the village, the people celebrated the beginning of a three hundred year anniversary. In a New Year and in a bare hall, sheltered from the January cold, we looked back and, as I prayed for God’s blessing, we looked forward, to the unknown.

The schoolchildren sang songs about silver darlings, the Scottish name for herrings. If Alice had been there, she would have danced a lobster quadrille with seals, turtles and salmon.

Meanwhile, the air is sweet in a nativity summer. Kayakers paddle down the Clutha River and barbecues smoke on the beach. Yachts anchor in Half Moon bay as night falls, while children watch their shadows and play in the light of Curious Cove.

Two halves of the moon.