The Shadow of the Holy Innocents 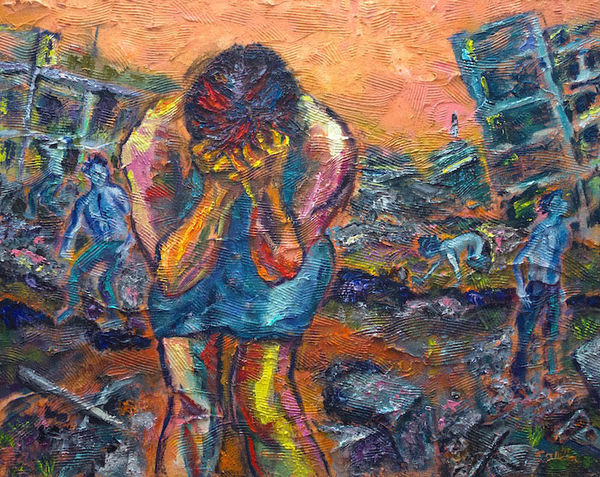 The Shadow of the Holy Innocents is a reminder to me that Christians should never be triumphalist as the magnificent truth of the gospel is always framed in thin, beautiful, delicate ice. Claims to truth have always been used to kill others and Christianity, uniquely, at its centre speaks of one who is killed. Suffering, death and tragedy mark life too deeply to be triumphalist, but at the same time, the resurrection cannot be hidden from view. But the resurrection is only authentic when the trace of blood is not denied, the suffering not glossed over, and the wound always has a scar, even when fully healed.

The Shadow of the Holy Innocents
Did Gabriel realise that he initiated a blood bath?
Had this sublime angel missed Jeremiah’s prophecy,
that Rachel’s weeping in Ramah would turn into
a wailing that would never stop, not even to welcome
angels in that dung-rich Bethlehem stable?
She was highly favoured. But what of those mothers
whose sons were forced from their arms,
torn from their feeding breasts,
heads smashed on paving stones brought from Jerusalem?
Had they given a stifled fiat, assenting as handmaidens?
Perhaps, when Mary was disturbed by Gabriel’s words,
she saw what havoc she unwittingly allowed:
giving birth to a childless son who would unleash
such pain upon her, for she must witness
what the other mothers saw: blood on wood.
She paused, asked the question, distracting herself
from the terrifyingly obvious: her life would never be
the same, her body not her own. She would walk
in the shadow of the presence, dimly clear,
and the wailing would not cease, growing louder and near.
While nothing is impossible to God, stopping the tears
will be. These women will weep until the end of time,
spitting phlegm into the darkness of divinity that offers no solace
but remains hanging there with us. A handmaiden’s lot?
© Gavin G. D’Costa
Image Destruction (2016), Judith Carlin. Wikimedia Commons.
Reprinted with the kind permission of Dr. Gavin G. D’Costa, Professor of Catholic Theology at The University of Bristol, UK.
This poem was first published in Making Nothing Happen: Five Poets Explore Faith and Spirituality, Gavin D’Costa, Eleanor Nesbitt, Mark Pryce, Ruth Shelton, Nicola Slee. Routledge (Routledge, 2014).
Christmastide
Share
Tweet