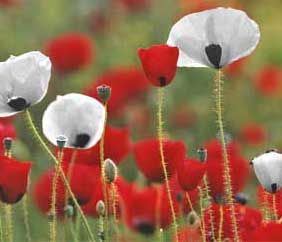 It was a trip that New Zealand poet, Kevin Ireland had been putting off, because he knew it was going to be emotional. But his connection with the Katherine Mansfield Society saw him attend the 100th anniversary commemoration of the death of 2nd Lieutenant Leslie Heron Beauchamp - Mansfield's dearly loved brother. Their father had pulled strings to get him to the Western Front; his commission put him in the line of fire and he died on October 6, 1915...

Beauchamp is buried at the Ploegsteert Wood Military Cemetery, but while there, Ireland visited other grave sites and battlefields, including Passchendaele.

"It's an overwhelming experience," he says. "I had nightmares about the graves. It's something so affecting - it's a fairly common experience for New Zealanders to feel shocked and haunted by it. I found it terribly upsetting. Afterwards of course I was very grateful I went. I was confronting something that I had put off and put off.

"The losses were just extraordinary. Death visited so many houses. Gallipoli was a long, drawn-out campaign but at Passchendaele they went through the mincer in a morning. For those who survived it scarred them and most of them didn't talk about it except on ANZAC Day. Many old soldiers were gassed or blinded, there were many amputees. They couldn't talk to their families about it, they didn't have the vocals. They couldn't make people understand what it was like over there - they were enraged."

Ireland says it's only recently we've been able as a nation to talk about it - something we now feel should never have happened.

"When I was a boy (Ireland is in his 80s) we used to beat the drums and wave the flags but it was something that was separate from us; there was no understanding. You can't get a sense of pride out of being told to feel proud. You get pride from the side issues - human endurance, fortitude, improvisation and mate-ship. All those sorts of things that happen in war." Now those stories are being told in a different way, new generations have a different understanding of what went on.

In Passchendaele, "the whole place is full of people who have disappeared with no known grave. You actually feel - it's extraordinary, and I'm not a supernatural type - but I felt the proximity of people in the air. It's a place you go to shudder," he says.

"I don't believe when you look around you're seeing ghosts but I do believe in the presence of the past. I was overcome with it. I was so totally moved I felt exhausted."

Ireland says New Zealand visitors can expect to come across unexpected scenes, such as the bronze statue of a Kiwi soldier with his lemon squeezer in Messines. "Suddenly you are rooted to the spot," he says. "It just rocks you when you round the corner ... it's a spooky feeling."

He recalls wandering through gentle woods, and strolling across rolling paddocks - "It's a pleasant land, there's nothing fierce about the landscape. It looks impossible to have had battles there where tens of thousands...lost their lives. It's beyond imagination."

On his return from that trip, Ireland tried to write but he was too close to the experience. With prompting from Passchendaele Society members Greg Hall and Dermot Ross he got around to looking at his notes and putting it down formally in time for centenary commemorations.

"It's in stanza form, properly measured," he says. "There's kind of a military approach to the words - I assembled it, lined them up, paraded them, made them neat and soldierly.

"I'm very pleased with it. I hope it puts down something of a New Zealander's feeling, reflecting the devastations of looking at the battlefield."

A fine morning at Passchendaele

On a fine morning, looking out
from a bright new observation post
over the slow and gentle ocean swell
of the Belgian countryside,
you’ll see them stepping out before you,
not real people or ghosts, or even shadows,
but a kind of flickering at the furthest edge
of sight, a disturbance in the mind,
and suddenly the past becomes the present
and you shiver and ask yourself:
how can this be happening,
how can they be dying here all morning
faster than two a minute? You start to count
and you find that when you add the wounded
they are tumbling over, like a storm
of autumn leaves, almost as you blink.

We gaze across a tilled field to the easy roll
of what could almost be a ridge
and possibly something of a modest spur,
then on to a village and not much else
but a scattering of misty barns and trees.
The soil is firm and looks rusty with age
though the air is warm and still and dusty,
and nearby you can buy a meal or a beer.
There is nothing readily you’d call a hill.
It seems a landscape for a stroll,
far too tidy for a battlefield. Yet if, indeed,
you choose to wander down a bit
you’ll cross the gruesome place where so many
young men simply disappeared and you’ll
need to hold your nerve when thinking trenches,
mud and cold and ponds of muck and ooze.
Here you’re forced to face the fact that there
never is a perfect war, yet some seem worse
than others, and the worst don’t get talked about
at home. The whole thing was a shambles,
a disaster, a catastrophe – and our only consolation
lies in little miracles: my best friend’s father
somehow scrambled to the German wire
then back again and never got a scratch.