BACK TO THE FUTURE: Taize 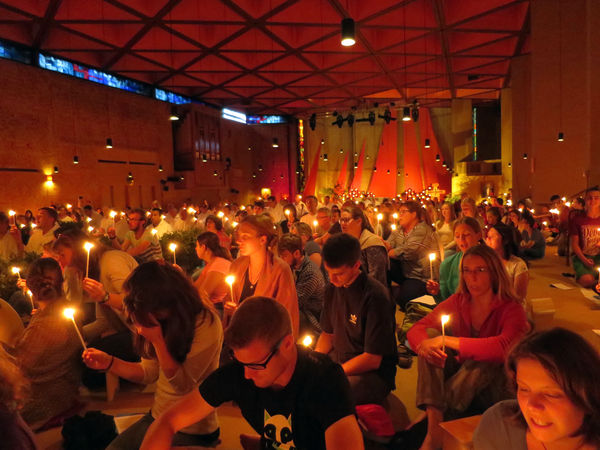 I first visited Taizé in 1970. I was 16, and the Taizé community was just about to enter its heyday. The community had been founded during the Second World War, when a young Swiss, Roger Schutz, left the safety of his neutral homeland to live alongside the people of neighbouring France and share something of their suffering.

Taizé was near to the border of occupied and free France, and soon he was busy helping those pursued by the occupying German army to escape capture, and flee to Switzerland. Schutz was joined by a small group of friends, and so the tiny community began its common life.

By 1970, his story was being retold all over Europe, and increasing numbers of West European youngsters were coming to see for themselves this place of reconciliation, and share in its life. The numbers continued to grow. By the time of my second visit, in 1975, young people were coming in their tens of thousands; indeed, the numbers were so large that we sometimes spent the whole day — reading, talking, singing, discussing — in the meal queue.

Taizé had the optimism of the 1960s, and at times felt a little like a religious hippy commune. By day, we sat under the trees in discussion groups; each evening, we sang round a number of camp fires.

As a shy and rather anxious teenager, I found it confusing, and a little hard to engage. I was in a discussion group with eight other people; between us, we represented five denominations and four languages — an entirely new experience. But I was deeply touched by the worship, in the large concrete Church of Reconciliation, constructed in 1962.

It was not so much the spirituality as the participation of people of different traditions — they were saying the Lord’s Prayer next to me in French, Spanish, German, or Dutch — and discovering that I, too, could use their words to praise God in the multilingual chants of the Taizé liturgy. My eyes were opened to traditions, people, and languages beyond my own, and I began to understand the importance of ecumenism, as well as my responsibilities as a European citizen.

My last visit was in 1978, with fellow students from the Ecumenical Institute of the World Council of Churches at Bossey, near Geneva.

But this year, in the second week of Easter, I visited Taizé again — with Gerhard Tiel, a pastor in the Evangelical Church in the Rhineland, in Germany, who had also accompanied me on my last visit in 1978. The concrete church was still the same, but larger: it now had three waves of wooden extension at the west end. We still participated in discussion groups; mine included three French people, two Germans, and a lady from Hong Kong.

Taizé counted us as adults, not young people, and we had a special place to meet and eat, with just a little more comfort. We didn’t talk about denominations or our distinctive traditions — perhaps because the support of Roman Catholic, Orthodox, and Protestant Churches, is now accepted, understood, and embedded. At any rate, it didn’t seem to matter: we talked from our shared Christian and “adult” experience.

Beyond the 60 or so adults, there were about 2000 young people — many of them German — whose energy and exuberance brought Taizé alive, as it had done 40 years before. The numbers were smaller than I remembered, and there were fewer from the UK, but the languages were more extensive, and now included Polish, Bulgarian, Swahili, and Chinese, reflecting a wider Europe, greater mobility, and our engagement with a bigger world.

It was challenging in a number of sometimes contradictory ways. The perspective was wider, the different traditions less important, the variety greater, the numbers smaller.

But it is time to come down from the mountain, and I have returned home to Brexit, tensions with Russia, cybercrime, the NHS funding crisis, and more knife attacks on the streets of London . . . and, in the Church, declining numbers, a shrinking church voice in our national life, church leaders who are tired and stressed, and finances on a shoestring.

I wonder how far, as a Christian community, we can continue to afford the luxury of division, divergence, or mutual suspicion, as we struggle to maintain separate buildings and church infrastructures in parallel. Taizé has nudged me to find a renewed enthusiasm for ecumenism; an energy to try again to address and overcome those challenges that so constrained the previous generation of ecumenists, and lost us the past 40 years. As Brother Roger so simply put it, “Make the unity of the body of Christ your passionate concern.”