Whisky, haggis, love an' a' that 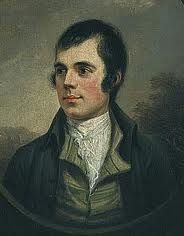 In the Rai Valley this week, cicadas were in conversation. A sign of late summer. Cherry tomatoes have been planted, with hope, in the Picton garden. “The only ones that will grow now”, according to those with green-fingers.
The boundless energy of summer is giving way to a different season. Peaches are rose tinted and green pears bend the boughs of the old tree.   Harvest and ploughing awaits.
Snow and sledging are the order of this January day on the other side of the world. Maggie in Somerset speaks of snowdrops turning their faces to the slow returning sun. Candles of hope and the ancient prayer of Simeon beckon us to Candlemas.
Memory takes me to cold winters and long dark evenings in Scotland warmed by the crackle and glow of the coal fire. Uncle James would tell stories of the sea. My father sometimes read aloud the poetry of Robert Burns. It was for the promise of a sixpence that I recited Burns' epic masterpiece, Tam O' Shanter.
January 25th 1759 is the date of his birth. Now and over the next few days, the creativity of this toil-bent Ayrshire farmer and disinclined Excise Officer will be celebrated from Scotland to Stewart Island. His poetry will be read and performed, ballads sung, glasses raised to toast his Immortal Memory.
Dunedin, that stately 'Edinburgh of the South' has its own association with the Bard. Dr. Thomas Burns, founding father of the Otago settlement and solemn, dignified minister of the First Church of Otago was his nephew. A statue of Burns stands high above the people in The Octagon. Fine though the sculpture is, I wonder what the egalitarian poet would think of being placed six feet above contradiction, like the preachers in the pulpits of his time and all time?
We know only too well that Burns loved wine, women and song and wrote much about all three. He was, though, a deeply religious man and aware of his shortcomings. In his poem, To a Louse, On Seeing One On A Lady's Bonnet At Church, he muses,
“O wad some Pow'r the giftie gie us, To see oursels as ithers see us! It wad frae mony a blunder free us, And foolish notion: What airs in dress and gait wad lea'e' us, And ev'n devotion!”
Burns' was critical of 'The Kirk', the Protestant church in Scotland. Writing poetry gave voice to his radical, libertarian and religious beliefs. Not for him the cold Calvinist censoriousness and alienating chastisements of the church and its selfish, elitist striving for personal salvation. He was scathing in his denouncement of what he regarded as the hypocrisy of the religious leaders and their supersitions, in the guise of the teachings of Jesus Christ. Perhaps Burns could hear echoes of the babbling Scribes and Pharisees when the man from Nazareth questioned and exposed their power, authority, hypocrisy and vested interests. The dance, song, poetry, spirit of the Jewish faith had long been extinguished from their hearts and souls.
In Holy Willie's Prayer, Burns satirises the leadership of the Kirk. Considered to be one of the religious 'elect', preordained for heaven, Willie says,
'…I am here a chosen sample,
To show thy grace is great and ample;
I'm here a pillar o' Thy temple,
Strong as a rock,
A guide, a buckler, and example,
To a' Thy flock.”
With a just heart, borne out of familial and national poverty and inequality, Burns also wrote about the pomposity of the ruling classes and the excesses and abuses of wealth and power that he saw around him. He envisioned a world-wide brotherhood and sisterhood that would, in its togetherness, reflect the worth of the individual and the whole, affirm the values of justice, equality, honesty, love. Rampant religious individualism would not bring heaven on earth.
With no awareness of the inclusive language of these modern times and I hope that any sensitivities will excuse him of that, his poem, 'Is There For Honest Poverty', better known as 'A Man's a Man for A' That' speaks a profound message for his time and all time.
“What though on hamely fare we dine,
Wear hoddin' grey, and a' that.
Gie fools their silks, and knaves their wine,
A Man's a Man for a' that.
For a' that, and a'that;
Their tinsel show, and a' that';
The honest man, though e'er sae poor,
Is king o' men for a' that. –
I have always admired the Great West Window dedicated to Robert Burns in St. Giles' Cathedral, the High Kirk of Edinburgh. www.st.gilescathedral.org.uk. I hear the words from Isaiah's prophecy, “I will lay thy stones with fair colours, and lay their foundations with sapphires. And I will make thy windows of agates.” As Assistant Minister there, I loved the window when it came to life with light. A central sunburst, opening out “like a red, red rose”, reflects the hope and the light at the heart of the Christian faith…even the worldwide church, in spite of its flaws.
So, living in the egalitarian society that is New Zealand, I happily raise my glass with others, here and all over the world, in toast, to the Immortal Memory of Robert Burns, with the hope that prophetic voices will always be heard.
“Then let us pray that come it may,
(As come it will for a' that,)
That Sense and Worth, o'er a' the earth,
Shall bear the gree, an' a' that.
For a' that, an' a' that,
It's coming yet for a'that,
That Man to Man, the world o'er,
Shall brothers be for a' that.”
Notes
“hoddin”: coarse cloth
“Shall bear the gree”: shall come off best
To read and listen to the work of Robert Burns: www.bbc.co.uk/arts/robertburns/works
Image: Robert Burns by Alexander Naismith from www.localnewsglasgow.co.uk
Share
Tweet