To be silent is to be unfaithful 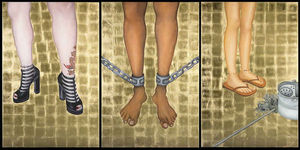 In her book, Enslaved: The New British Slavery [viii] , Rahila Gupta writes, 'human progress must be measured by the extent to which we have ended slavery. We should be fighting for a future when the world truly belongs to all of us'.
To be silent is to be unfaithful.
©Hilary Oxford Smith
May 2014
Image Nicola Green www.nicolagreen.com
[i] I have borrowed this title from the title of a Church and Society Council Report to The General Assembly of The Church of Scotland, May 2007 www.churchofscotland.org.uk/speak-out/social-issues/human-trafficking
[ii] Rousseau, Jean Jacques, The Social Contract, 1762, (Pacific Publishing Studio 2010) page 1
[iii] www.walkfree.org
[iv] www.globalslaveryindex.org
[v] See www.unodc.org for more information
[vi] See www.beehive.govt.nz, Second Reading, Fisheries (For Charter Vessels and Other Matters) Amendment Bill 2014, www.parliament.nz and www.slavefreeseas.org for more information
[vii] www.cathnews.com
[viii] Rahlia Gupta, Enslaved:The New British Slavery, (Granta 2008) page 302
Meditation, Reflection, Freedom, Slavery
Share
Tweet