The canticle of the bees 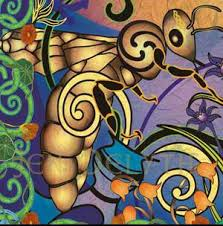 David Wells is our neighbour and friend. His love for bees began in childhood and now he looks after these wondrous little creatures as an amateur beekeeper.
He is developing a balanced, holistic approach to the care of his bees so that they are happier and healthier in the hive and out of it. He hopes that the flowery golden honey they make will be of a higher quality and in greater abundance. We look forward to a taste of this sweet contentment.
Bees are believed to pollinate up to a third of the world's food crops and I am reminded of Albert Einstein's words, “if the bee disappeared off the face of the earth, man would only have four years left to live.” One good news story last week was the decision by the European Commission (EU), to ban, for two years, the use of neonicotinoid chemicals in pesticides, which are thought to be a major contributory factor to the devastating number of bees dying around the globe.
Limited research has already shown that these chemicals leave a residue in the pollen and nectar of crops which affects the central nervous system of bees, interfering with their ability to learn and remember. Their use is viewed as a serious threat to the ecosystem and the availability of food in the world.  More than three million people in Europe signed an online petition calling for a ban on neonicotinoids. Coupled with the fact that the work of honeybees contributes over € 22 billion to European agriculture, national Governments, reluctant or otherwise, have been galvanised into action.
The overwhelming scientific, political and public support for a two year ban, not only on the pesticides, but also on the sale and use of seeds treated with them, will give a much-needed window of opportunity for full, objective research to be carried out and substantiate, once and for all, how lethal these chemicals truly are, not only to bees but to birds and other creatures, including us. It comes as no surprise that the big multi-national companies who sell these pesticides, are strongly opposed to the ban and the forthcoming research.
Since 2009, the Green Party of Aotearoa New Zealand has been arguing for a similar ban and now advocates that our country follows the EC's lead.   On these islands, there is collateral damage from some conservation policies. Increasingly intensive farming methods and practices, including some from commercial apiculture, are also causing stress, illness and indiscriminate poisoning to the creatures of the earth, sea, sky, the land, the rivers and the sea. Can we hope then, that our voices, if they are consistently loud and protesting enough, will be heard by our elected politicians who work out of the parliament building in Wellington, ironically named The Beehive?
Honeybees have been around for at least 150 million years. In ancient world mythologies, civilisations and religions, they have inspired great poetry and writing and have, over the long centuries, symbolised sanctity, immortality, resurrection.
In starry domed Orthodox churches throughout the world, the scent of beeswax candles suffuses these places of prayer and worship. The pure, golden wax, extracted from the honeycomb of virgin bees, is traditionally lit to cleanse the air, lighten the people's spirits and symbolise the purity which Christ received from his mother, Mary. For many of the Christian saints, particularly the Celtic ones, bees were thought of as messengers between heaven and earth, gifting to us, in the hive and out of it, one of the finest and noblest examples of community life and activity.
The queen bee is the mother of the hive and all are deeply loyal to her. Each bee works for the good of the whole, having a specific duty and responsibility, carried out, without envy and rivalry and with care and selflessness. These gentle creatures nurture the beauty and fecundity of the earth with their gift of pollination, giving humanity strength and nature, diversity.
Carrying sweet scented nectar, pollen and propolis, which has been gathered without injuring the freshness of a single flower petal, they return to the hive and co-operate instinctively and equally with others to produce pure wax and sweet honey. They rarely sting – only when stepped upon, roughly handled and mostly when protecting the hive from predators. Such is their sacrifice that, after they have stung, they die.
These tiny humming insects have much to teach us. A testimony to the wisdom of the Creator, they express the harmony, justice, peace and integrity at the heart of creation. I have a beautiful, tiled picture on my study wall, called 'The Canticles of the Creatures'. It was bought on a visit to the Italian village of Assisi where St. Francis, of that name, was born. He embodied a deep spirituality of the earth, his imagination and faith alive with a love for creation.
He praised and gave thanks to God for Brother Sun, Sister Moon, Brothers Wind and Air, Sister Water and Sister Mother Earth “who sustains and governs us and produces various fruits with coloured flower and herbs.” He also said, “if you have men who will exclude any of God's creatures from the shelter of compassion and pity, you will have men who deal likewise with their fellow men.” How open are we to a way of knowing and remembering that only the creatures can offer us?
It is good to give thanks for the ones   - male or female - who have mothered us over the years. Mother Earth is a mystical and beautiful gift from God. We are to reverence her and all her forms of life and live in a way that cares for, sustains and nurtures her, as she cares for, sustains and nurtures us.
“Honour your father and your mother, so that you may live long in the land the Lord your God is giving you.” (Exodus 20:12)
Image: 'Bee', Jen Delyth, www.celticartstudio.com
© Hilary Oxford Smith
8 May 2013
Share
Tweet