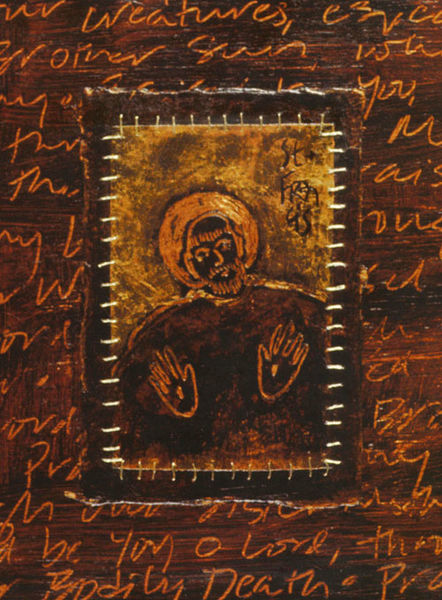 Happy Feast of St. Francis! The hospitality of Franciscans has been a pivotal gift in my life, and I owe them much for helping to preserve my vocation and to sustain me when I made a flying leap into ministry beyond the local church. In particular, it was my Franciscan friend Brother David who helped to inspire that leap and gave me a place to land. I had met him when I was serving as a pastor. Shortly afterward, he established a Center for Art and Contemplation at the retreat center where he worked and where, thanks to the good graces of the Franciscans and not a few other folks, I would become artist-in-residence for some years.

David and his brothers at San Pedro Center gave flesh to the wonders and challenges of Franciscan life and to the spirit of St. Francis. Born in Italy in the 12th century, Francis gave up the riches of his family in order to embrace a life of radical devotion to God and to God’s creatures. He took as spouse the one whom he called Lady Poverty, and a community began to gather around him; they became known as the friars minor (“lesser brothers”). Their rhythm of life included preaching missions (Francis traveled widely, journeying even to Egypt), periods of fasting and prayer, and service to those who lived on and beyond the margins of the society, notably those living with leprosy. It was during a period of fasting and prayer prior to the Feast of Michaelmas that Francis, secluded on a mountain with Brother Leo, received the stigmata—the wounds of Christ.

We know St. Francis in large part for The Canticle of the Creatures, which he began during a time of intense illness. Of his desire to write the canticle, he said to his brothers, “I wish to compose a new hymn about the Lord’s creatures, of which we make daily use, without which we cannot live, and with which the human race greatly offends its Creator.” His praises include, famously, “Sir Brother Sun” and “Sister Moon and the stars” as well as “Brother Wind,” “Sister Water,” and “Brother Fire.” He counted mortality among God’s familiar and familial creatures; on his deathbed, Francis added verses that included the line, “Praised be You, my Lord, through our Sister Bodily Death, from whom no one living can escape.”

Francis left behind a handful of other writings that testify to his deep and simple love of God. With World Communion Sunday coming up this Sunday, it seems fitting to include this portion from A Letter to the Entire Order, which Francis wrote in 1225-1226:

Let everyone be struck with fear,
let the whole world tremble,
and let the heavens exult
when Christ, the Son of the living God,
is present on the altar in the hands of a priest!
O wonderful loftiness and stupendous dignity!
O sublime humility!
O humble sublimity!
The Lord of the universe,
God and the Son of God,
so humbles Himself
that for our salvation
He hides Himself
under an ordinary piece of bread!
Brothers, look at the humility of God,
and pour out your hearts before Him!
Humble yourselves
that you may be exalted by Him!
Hold back nothing of yourselves for yourselves,
that He Who gives Himself totally to you
may receive you totally!

And in the Earlier Rule that Francis wrote for his community, he pleaded,

On this day of celebration, and all the days to come, may it be so. Happy Feast!