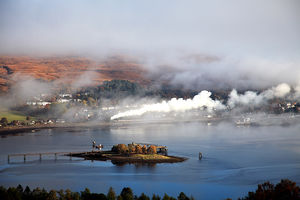 There is something blissfully solitary about train journeys unless you feel minded to share stories with the traveller seated opposite who is, like you, bored with paperback melodramas, texting the world and fleeting fields.

I am not of that mind on the 13.30 from Inverness. The late afternoon landscape invites imaginings of toiling harvest workers gathering golden bales of hay, of ancient Celts standing in a stone circle as they watch the moon skim low over the hills like a great god visiting the earth, of King William the Lion’s army defending his Red Castle from Viking invaders. Brief encounters.

And then to Dundee, once described as the city of jam, jute and journalism and where the RRS Discovery, the Antarctic exploration vessel of Robert Falcon Scott and Ernest Shackleton was constructed in 1901. This magnificent ship is now anchored in a custom-made dock at Discovery Point on the Firth of Tay. She and her crew spent two years locked in sea ice in McMurdo Sound. Scott and Shackleton relocated the Southern Magnetic Pole and returned with the news that Antarctica was a continent.

Travelling by any method has its austere moments. It was the Italian poet, Cesar Pavese who mused, ‘…travelling is a brutality. It forces you to trust strangers and to lose sight of the familiar comfort of home and friends. You are constantly off balance. Nothing is yours except the essential things – air, sleep, dreams, the sea, the sky – all things tending towards the eternal or what we imagine of it.’

Luke was Paul’s travelling companion. Faith and patience must have been two of the many virtues this benign doctor and writer of stories was blessed with. Paul could be complex, volatile and difficult. On his mission he was tough and courageous and faced many challenges. Luke faced them too. As the old missionary neared the end of his life, with all his fellow travellers having deserted him or gone elsewhere, he poignantly wrote to Timothy, ‘only Luke is with me’.

Another teller of tales, Robert Louis Stevenson believed that ‘we are all travellers in the wilderness of this world, and the best we can find in our travels is an honest friend’. He finally ended his sunset days with Fanny, his wife and soul mate, on the South Sea island of Samoa enjoying wine which he said was like bottled poetry.

In the age of Ebola, there is a growing panic about leaving home shores for other shores. Even though medical staff and non-governmental humanitarian agencies have been working with the sick and the dying in West Africa for a long time, it has slowly dawned on the rest of the international community that this disease could be visited upon them. So now, politicians are on high alert, lining up to urge a greater response to this modern-day plague. The people are fearful and fear breeds fear.

American Dr. Kent Brantly contracted the Ebola virus while working in Liberia and survived to tell the tale. He will be returning to work there. ‘The Spirit that God has given us does not make us timid’ he said, quoting words from St. Paul. After all that he faced, it is remarkable that Paul was still able to write probably the most memorable description of love that exists.

Globe-trotting is in the DNA of most New Zealanders. Emigration is the story of this land. People have travelled across many oceans to settle here and never leave, some leave and some return. It was emigrants from all over the world who helped to build the country’s railways through hostile and mountainous terrain, deep ravines, criss-crossed streambeds. What a titanic achievement.

One of the most breathtakingly beautiful railway journeys in the world is the Coastal Pacific from Picton to Christchurch in the South Island. I think that the poet and railway romantic, John Betjeman would have loved it. He ‘…was not one who stood with duffel bag, Penguin biscuit and fish-paste sandwiches on murky days at the ends of platforms taking down the numbers of locomotives…’[i] Betjeman travelled by train for the journey, not to get somewhere. This leisurely meander through an enchanted land of long white clouds is probably just long enough to still the ticking of the clock and time-travel to an older world. Air, sleep, dreams, sea, sky – all things tending towards the eternal or what we imagine of it.

Image: The Jacobite train wending its way to Mallaig on the West Highland Line www.scotlandrailways.com