Threatened but still in favour of women bishops 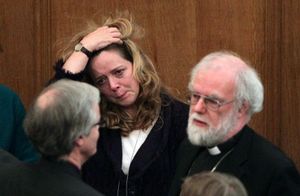 To my surprise a deep sense of threat was felt. Six votes in General Synod, where the Houses of Bishops and Clergy had voted strong majorities, the House of Laity said NO by six. Women in the Church of England are to remain below a purple ceiling, for three more years at least.
I was ordained at the end of 1984. On reflection this seems to have been at the end of the male dominated Anglican Church in this country. For my ordained life the experience has been marked by a deepening feminisation of the Church. For a bloke this has not been without discomfort, even a sense of threat.
The experience might be understood as undergoing a dilution of confidence about personal place in regard to ecclesiastical structure. There was no revolution, merely a dawning sense of inevitable change and adaptation to new circumstances, new forms of ministerial and professional relationships. The sense of dilution of 'blokey-like' confidence has been about the need to accept that gender has nothing to do with personal worth.
The dilution has been a gift. Less male confidence has become augmented with profound understanding of complementarity. Living toward personal wholeness cannot progress in isolation of gender.   This can be discomfiting for a male, educated and oriented toward physical prowess and control. While such challenge and change is not restricted to the Church, the Church provides a concentrated appreciation of such experience.
To hear the outcome of the Church of England's General Synod vote against women bishops gave rise to a sense of threat in this male cleric because my ministry has become liberated, enlivened by the destruction of male oriented gender qualification. Within me the response to the news raised frustration that my experience of ministry is seen by some, in position of authority, as being counter to revealed truths.
When factory looms replaced cottage industry those now known as Luddites set out to smash the machines. The inevitability of the industrial development could not be stopped. The opposing votes at the General Synod raise an echo reminiscent of the actions of those Luddites.   In the present case, intransigent theological and political position has been wielded against the self-evident reason of tested theological insight and ecclesiastical development. The advent of women bishops in England may have been stopped for now.
In the language of the Book of Common Prayer the vote has done no more than 'prevent' the change. That is 'go before' the event occurring. The ordination of women bishops in the Church of England is inevitable. Any threat felt by the likes of me to the outcome of this tragic vote might well be directed as energy, to strengthen the ministries women and men quite clearly share as companions in the Way of Jesus.
Image: Rueters via Straits Times
Share
Tweet