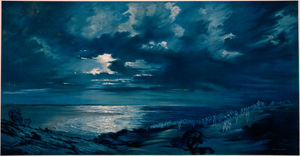 In 1941, when Japan entered the Second World War, the Marlborough Sounds, which makes up a fifth of New Zealand's coastline, was considered to be vulnerable to possible invasion. In the tiny, scattered settlements along the coast, a Home Guard, made up of women and men protected the sea and land as best they could.
After the war, the Home Guard Games were held each year in the Western Sounds, so that those who had served in home defence and their families could meet, free from the threat of war. Now known as the Te Towaka Sports Day, local people still gather to enjoy time together.
On Easter Monday, we enjoyed one of the most beautiful and awe-inspiring drives in the world to French Pass (Te Aumiti) in the Sounds. The road there, still largely unsealed and treacherous in places, was only completed in 1957. Between the headland of French Pass and D'Urville Island is a turbulent stretch of water. As the tide drops, a massive amount of water, banked up in Tasman Bay, gushes out to Cook Strait. When the tide rises, it rushes back in. With powerful currents, eddies and whirlpools, it is a passage feared and respected by mariners as well as being an area rich with the presence of dolphins, seals, orcas, seabirds and other marine life...a microcosm of the Creator's beauty and life.
On the way to French Pass is the township of Havelock. When I was working as a journalist I came across a small boat moored in the harbour there, called Seagull. I subsequently wrote up her story for the newspaper. Now one hundred and nine years old, this trusty vessel went to Gallipoli on the hospital ship, SS Maheno. Anchored off the island of Lemnos, she operated as the ship's tender. With her brave and steadfast crew, she transported wounded and dying soldiers to the hospital ship. Her war service is recorded in the Royal New Zealand Naval museum. I have no doubt that the echoes of dismemberment, pain, suffering and deliverance still echo around her bulwarks. She has surely earned her quiet retirement.
ANZAC Day on both sides of the ditch, seems to generate, somewhat ironically, the expression of conflicting viewpoints and ideas about what the day is really about. Isn't it though, a day to tread lightly, to be compassionate and to remember, with sorrowful love and gratitude, the ones who went to war in the paradoxical cause of peace, those who have lived and still live with loss, separation and lasting injury of body, mind and spirit since and all the countless others who have been and will be, on this very day, the civilian and military casualties of war?
This year is the centenary of the beginning of the First World War. It was to be the war to end all wars. Yet in spite of the now widely acknowledged military blunders and the unimaginable loss of life, the history of the world tells us that there will always will be those, who with a deep paucity of spirit, want to dominate others and use whatever means at their disposal to fight for ultimate power and possession. Conversely, there have been and always will be the people who work tirelessly to resist such agendas, the ones who restore and reconcile and make peace.
Amidst the discussions about the significance of ANZAC Day, which should be rightfully explored but not only in the few days in and around the 25th of April, the suffering and loss of so many can never be allowed to be buried in our memory or the national and world memory.
It is decent and honourable to commit ourselves anew to creating a world in which all that is good and precious and shining will grow and flourish.   What is ultimately remembered on ANZAC Day or on any Remembrance Day come to think of it, is, I want to suggest, not actually patriotism, jingoism, the glorification of war, the expression of nationalistic fervour. That is, arguably, a kind of easy reductionism. What is deeply remembered in the individual and national consciousness is the indiscriminate slaughter of humanity, the quiet dignity of the human spirit, the gold that is buried in the ground, the longing for peace, the sanctity of life, the indestructible power of love.
Some of my family and friends served in the civilian and armed forces at home and overseas in two world wars and in other conflicts since. I have come to know as the years have gone by, that in spite of their own misgivings and apprehensions about the architects of war and the reasons for and consequences of war, they and others have much to teach us about courage in the face of fear and death, humility and strength, vulnerability and loyalty, endurance and suffering, peace and love.
As we continue to reflect upon issues of nationhood and identity which appear to be intertwined with the commemoration of ANZAC Day, we might also reflect upon how we can become peacemakers in our own circles of life, for peace begins with you and me. The Church also has to be willing to prayerfully and demonstrably grow into a visible unity and be a sign of hope to our often divided world. It is easy to preach and pray about peace. The tough call is to make peace and live in peace with one another every day. That is altogether a much greater challenge.
©Hilary Oxford Smith
25 April 2014
Image
Carillon, William Longstaff, National Collection of War Art, Archives New Zealand.
During the course of the First World War, the New Zealand Expeditionary Force suffered 59,483 casualties of which 18,166 were fatal.  Will Longstaff honoured the New Zealand fallen by painting a scene depicting the spiritual images of soldiers gathering on the beaches of Belgium and listening to the carillon bells in their home country. The painting is permanently housed at Archives New Zealand, Wellington, New Zealand.
Reflection, Meditation, ANZAC, Peace, Church
Share
Tweet