On the 12 days of Christmas 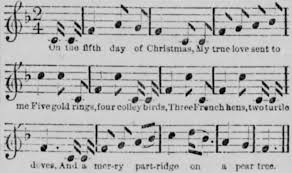 IN HER poem for the feast of the Presentation, Christina Rossetti writes: “O Firstfruits of our grain, Infant and Lamb appointed to be slain, A Virgin and two doves were all Thy train, With one old man for state, When Thou didst enter first Thy Father’s gate.’”

While the Presentation or Candlemas may seem a little distant from the “Twelve Days of Christmas”, it has often been treated as the final liturgical moment in the season of Christmas. Many people keep their nativity sets up until that date. In addition, Shakespeare’s Twelfth Night was first performed on Candlemas in 1602.

Rossetti’s poem also reminds us of the rich symbolism of doves. She implies that the two doves — offered as redemptive sacrifice in the biblical text — are part of Christ’s simple “train”, or honour-guard, as he is carried into the Temple for the first time.

The Bible, of course, contains rich dove-based symbolism. Noah sends a dove out to test whether the flood has receded, and it brings back a freshly plucked olive leaf, a sign of hope and life. Perhaps, most definitively, in St Luke’s and St Matthew’s Gospels the Holy Spirit descends in the form of a dove at the moment of Christ’s baptism.

Doves (and olive branches) have become associated with peace and reconciliation. The depth of connection between doves and peace is reflected in American political idiom: those in favour of aggressive foreign policies are called “hawks”, while those who take a conciliatory stance are called “doves”. For Christians, the connective tissue between ancient and modern dove symbolism lies in the Bible: doves take us back to God and to his son, the Prince of Peace.

As a song, “The Twelve Days of Christmas” provides a fun singalong for all ages. In the year of the centenary of the Armistice, however, there is potentially great pathos in the gift of “two turtle doves”: doves were offered at the dedication of Christ; doves signal peace; and doves show forth the Holy Spirit. In a world that still hungers for peace, and it is yet to find it, may we know the blessing of doves this Christmastide.

Canon Rachel Mann is Rector of St Nicholas’s, Burnage, and the author of Fierce Imaginings: The Great War, ritual memory and God (DLT).

“TRANSCEND reflects the Palestinian dream of a prosperous life with open borders,” the team leader for an Israeli client, eTeacher, Abdallah Khalifah, says. “We’re working with clients from all over the globe, and across borders. I believe that creating jobs for youth in a very troubled place of the world is worth working for.”

Transcend is my Bethlehem baby, born in 2012. It’s a call-centre business, set up with my friend Nassim Nour, and uses the language skills in Bethlehem to bring jobs, skills, and exports unaffected by movement restrictions. Today, we have 120 staff providing contact-centre services and software development for businesses in Palestine, Israel, and beyond.

Besides creating jobs designed to survive even in a curfew, we try to model integrity and gender equality. Our first CEO, Abeer Hazboun, became the first Palestinian women to win a place on the prestigious IMD MBA programme in Lausanne, Switzerland.

Encouraging and respecting our staff is not only morally right, but also makes business sense. “I feel like management trusts my decisions and supports me in my daily work,” says Rozet Najajrah, who was regularly “Agent of the Month”, and is now team leader for a wellness programme.

Behind Transcend is a desire to bring hope. Yaman Qaraqe, one of our first team leaders, says: “This transcends political barriers and limitations. I really love that. I’m the eldest daughter in the family, and I’m my family’s hope. . . I love it, because it makes me feel renewed every day because I learn about other cultures, and it helps my English come to life.”

Abdallah, Abeer, Yaman, and Rozet are just four “calling birds” whose communication skills enable us to transcend the separation wall. Transcend is risky, because not everyone likes what we are doing; but it is one small source of hope in a troubled region. The Jesus plan was high-risk, but is the primary source of hope for us all in a turbulent world.

Jerry Marshall is the co-founder and chair of Transcend Support Ltd.

SLEEVELESS dresses are unwise in December. The bridesmaids are shivering, and even in cassock and surplice I am chilled. Only the bride is impervious to the cold, fuelled by an inner furnace of anxiety, adrenaline, and hope. I arrange the bridesmaids in order of height, whisper some reassurance to the bride, and nod to the verger. She signals the organist, and the bridal party makes its stately way down the aisle.

All weddings are special, but Christmas weddings have a distinctive beauty. We have brought in evergreen branches, and the scent of pine and incense is sharp in the air. The candles, barely visible in summer, gleam in winter gloom. The florist has found mistletoe to hang from the pulpit — pagan, possibly, but the church will happily adopt it, just as we once adopted this midwinter festival and made it our own: a celebration of light and love coming to redeem a benighted world.

We sing a carol. There is nervous laughter as I preach about the joys and tribulations of marriage. And now the couple are facing each other, and we begin the vows. Silence falls, absolute silence. Even the smallest children are still, caught by the power of the moment, as two people repeat after me the ancient words. To have and to hold. For better, for worse. Till death us do part. They exchange golden rings, and make more promises. With my body I honour you. All that I am I give to you.

And now they are married, and no one shall put them asunder, and we all cheer, and the organist belts out the “Hallelujah Chorus” to carry them down the nave.

Love came down at Christmas, and on this wedding day we see it come down still. In this church, on this day, blessings abound.

THE ninth day of Christmas 2018 will fall on Wednesday 2 January 2019. This enjoys the happy distinction of being a Bank Holiday in Scotland, though not in England; an anomaly sometimes linked to the Scots tendency to celebrate Hogmanay (New Year’s Eve) in a particularly committed fashion, during which, as the Scots saying that echoes the King James Bible confesses, “strong drink might be taken.”

A second Bank Holiday allows revellers to switch to Irn Bru (Scotland’s other national drink) and recover themselves the better to cope with those ten heartless souls who will be drumming them back to work on 3 January.

The pipers in this glorious English carol (there are sometimes 11) may not have originally been bagpipers, but, given the carol’s disputed origins and meanings, and generally anarchic character, I am happy to claim them for Scotland and clothe them in tartan.

Sometimes despised and rejected by outsiders, the traditions of playing and composing for the Highland pipes are extraordinarily rich and subtle, encompassing both the “little/light music” (in Gaelic ceòl beag) of marches, strathspeys, reels, and jigs; and the “big music” (ceòl mór) of Pibroch/Piobaireachd: a slower, extended art music in which a solo piper works elaborate variations around a melodic theme.

Reflecting on a move into the last days of the Christmas season and the rather more pagan and secular disruption of the 12 by Hogmanay, I cannot resist invoking Jesus’s words in Matthew 11.17, chiding the cynicism of his critics: he compares his generation to children in the street, crying out indignantly “We piped for you and you did not dance, we sang a dirge and you did not mourn.”

The wisdom he invokes knows that there is a time to mourn and a time to dance. A good piper — or even nine, or 11 — will be able to accompany both, and a wise Christian will hope to discern when to do which.

FOR some, the idea of one drummer drumming is quite enough. But 12?

Group drumming is just about as old as it comes, and drummers have gathered, making rhythms for dancing and marching, since the dawn of time. The sound of drums is powerful: it can prompt a child to jump for joy, and an old person to sway and clap, despite the pain.

I left school at 16 to start a career as a drummer. And, in 1995, I had a dream that changed my life. In it, I stood with a group of drummers, drumming in the presence of God. We were pounding out a beat that somehow reflected the power and majesty of God.

It so inspired me that it changed the course of my life. I started gathering Christian drummers to play together and live out what I had seen in the dream: drummers beating out rhythms as prayer, praise, and encouragement for the glory of Christ. I called the gathering “Psalm Drummers”, and, over the years, these Christian drummers went on to drum on numerous occasions, in many contexts, leading the church in worship.

I was recently in Pakistan, and had the privilege of worshipping alongside Christians whose faith is often challenged in the same way that first-century believers were. During my visit, I was able to play with other drummers and lead a congregation of several hundred believers in a rhythmic version of the Lord’s Prayer. We played a powerful beat as the crowd declared, “Our Father in heaven, hallowed be thy name.” It was electric, as we all came together with one voice in praise.

The Bible tells us that God is love. This Christmas, may God, our “true love”, send to us the joyful sound of 12 drummers drumming: a heavenly heartbeat of faith, hope, and love.

Terl Bryant is a drummer and percussionist, and founder of Psalm Drummers. www.voiceofdrums.com

The full article was published in The Church Times, 21 December 2018. www.churchtimes.co.uk/articles/2018/21-december/features/features/on-the-12-days-of-christmas