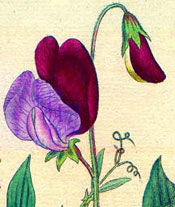 Dark blue Lathyrus odoratus, arranged in the font, (Sweet Peas to you and me), mingle with the honeyed smell of beeswax, evoking the heavenly scent of yesteryear. The small church overlooking the village of Wakefield, near Nelson is a fragrant sanctuary of memory.
Built in 1846, St. John's Anglican church is the oldest church in continuous use in New Zealand. I hear echoes of prayers uttered on embroidered kneelers of flowers, cats and crosses and hymns sung through all the long generations.
A polished brass plaque is dedicated to one of the founders of the church, Englishman, Edward Baigent, who with his wife, Mary Ann and their children, cast off from home and travelled to this wild and unpredictable land to begin a new life. Settling in Wakefield on the 9th February 1843, Edward, along with others, constructed the church using local timber. It is testimony to their faith in a God who led and shared their way. I am drawn to this place, exactly 170 years later, to the day.
The clear, diamond-shaped leadlight windows, reveal a sanctity at the centre of creation. Tall Wellingtonia and Redwood trees, over a century old, protect this place of prayer. I look up to the chancel ceiling and see pawmarks. When Edward Baigent left sections of the ceiling outside overnight, a cat with muddy paws walked across the boards and made its presence known forever more.
A tiny ray of light shines on a spider, safely weaving a web. I am reminded of words about Mary and Martha, written by Kathy Galloway in her book, Imagining the Gospels:
'Martha's younger sister, Mary...could sit in the midst of a tornado blowing through the house and never notice...could let milk pans boil over, forget to put coal on the fire...get into a bed that had been untouched since she tumbled out of it...and see a spider's web as the occasion for deep meditation on the nature of life, rather than as an evil which had to be furiously combated with dustpans and brushes.'
The visitors' book speaks of journeying and love. From the four corners of the world and everywhere in between. Fourth and fifth generation descendents of the Baigent family, Lynne and Patrick Kear from Gloucestershire and Tauranga, have been here earlier in the day. Anthony and Geraldine Pascoe journeyed from South Africa last year…'I am the grandson of Hilda Ladley who had worshipped at the church in 1895 and who travelled to South Africa in 1902 to be a teacher.'
Lent is upon us. Like many churches and sacred places, St. John's proclaims a pilgrim God who journeys with people and is closest to them in the experience of their wandering through the wilderness. The ancient symbol of the Celtic knot, with no apparent beginning or ending, reflects the endurance of our spiritual journey - that sense of the continuum of life with God, the exploration of twisting and turning paths which can sometimes double back on themselves. All held though, within God's providential love and care.
I hear on the radio, during the fourth watch of the night, that Pope Benedict XVI is to resign. News to be met with a certain uncertainty. As expectation fills the air, red-robed cardinals with biretta hats will be winging their way to the Eternal City to uphold the Church. We are to pray for them and their heavenly and earthly task. My father converted to Catholicism later in life and I recall accompanying him to Mass most weeks. My heart has always been warmed and touched by this devotional faith.
It is late winter in Italy. I give thanks to the Franciscan monk from Sicily, Father Cupani, who, in 1695, recorded the native and wild Sweet Pea as a new flower and gave it a Latin name, meaning 'delicate pleasures'. The New Zealand botanist Dr. Keith Hammett, collected seeds from the flowers in Sicily in the 1970's and we now enjoy their beauty and perfume in our gardens.
Their tender petals will open in The Vatican Gardens in April, heralding a new beginning at Easter. Resurrection flowers.
© Hilary Oxford Smith
Reference
Galloway, Kathy, Imagining the Gospels (SPCK 1988) p. 62
Image: Cupani Sweet Pea, Human Flower Project
Share
Tweet