Northern Lights in May 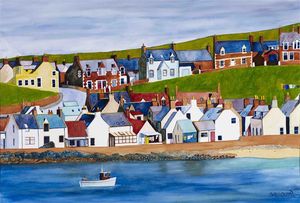 A golden and warm sun rose early on the first day of summer, May Day. The distant hum of a lawnmower reminds me of how much the lawn is part of this country's identity. Think cricket and the sound of leather and cork on willow, cucumber sandwiches and Earl Grey, afternoon strolls around the park, strawberries and cream. Antidotes to unpredictable weather.

It is blowing a howling, living gale outside. Our two puppy dogs think that wolves are about. Ferries have given up sailing to the islands, trucks are travelling by the low road and white horses ride the waves. Rudyard Kipling evoked the destructive possibilities of the sea in his poem, White Horses. Migrants from Africa, escaping to Europe and fleeing from fear, poverty, dispossession, know about white horses only too well. And still they ride the waves every day…some never reach the shore.

‘Be tough on immigration’ say those who believe that a mixture of boat tow-backs and harsh detention centres on remote islands is the solution to stop people smugglers and prevent deaths at sea. The delusional seduction of ivory towers.

In 1915, Kipling’s son, John, serving with the Irish Guards, went missing in action at the Battle of Loos. Kipling later served on the Imperial War Graves Commission and chose some words from Ecclesiasticus, which have been inscribed on many war memorials since: 'Their Name Liveth For Evermore'.

The names of those who died because of the badly planned, ill-conceived and disastrous Gallipoli campaign were remembered here on April 25th as they were in the Southern Hemisphere and elsewhere. After nine months of bloody slaughter, Winston Churchill, the ambitious First Lord of the Admiralty resigned. He lived to fight another day of course, spurred on by keeping a whisky going throughout the day.

The 70th anniversary of VE Day was commemorated last week. A fleeting, heady celebration back then, masking the loss and regret, the dispossession and homelessness, the anger and frustration. Churchill and his Conservative Party were heavily defeated in the 1945 General Election. There is a time for everything and everyone.

Another Conservative Prime Minister, Margaret Thatcher, apparently read all 845 of Kipling’s poems on a short summer holiday in 1976. It must have been raining. The new Members of Parliament, recently elected in the General Election in the UK haven’t had time to read poetry. The posturing and bargaining has started, superseding news from the far South of John Key’s ongoing Ponytail-gate saga.

Prince Harry though has been basking in the limelight of an Aotearoan sun. With Uncle away, the new Royal baby brightened the nation’s mood here. Charlotte Elizabeth Diana weighed in at 8lbs 3oz. Her mother, Catherine emerged from hospital, a few hours after giving birth, looking beautifully blessed. Her father too. They are sheltering trees where their little daughter’s fledgling heart can rest.

On this Ascension Sunday, I have been asked to christen a baby girl called Emily who was born on the Feast of Stephen. She came into the world, like a Christmas rose, petals unfolding, gentle and fragrant. Her parents’ love and kindness has come into blossom.

If her destiny is sheltered, I pray that the grace of this privilege may reach and bless other children who will be born and raised in torn and forlorn places.