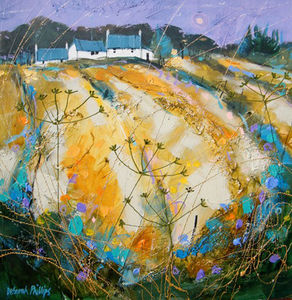 A New Zealander arrived on our doorstep last week, cold and alone. The early British summer had finally got to him. The Manse, which is the Scots name for a clergy house, was marginally warmer than the temperature outside.

When we lived in New Zealand, my memories of childhood summers in Britain were building sandcastles on the beach, eating ice-cream with sprinkles, skipping through fields of daisies, being an imaginary fish in the sea. Now I remember what I had chosen to forget. That it all happened in the cool wind and rain with glimpses of sunshine.

Our Kiwi friend, who is discovering his family history, was en route to the Orkney Islands, that archipelago, far north. Weather forecast grim. The Orcadian Sabbath is a day of rest, he said. Nothing to do except go to church. Which he did, at St. Magnus Cathedral. Afterwards he read The Observer newspaper, from cover to cover in the relative warmth of a B and B in Kirkwall.

The Cathedral, one of the finest medieval churches in Europe, is known as ‘The Light of the North’, founded in 1137 by the Viking, Earl Rognvald in honour of his uncle, Magnus. Thereby hangs a saga of political intrigue and dirty deeds. Since those early days, the Roman Catholic, Norwegian, Scottish Episcopal and Presbyterian Churches have all claimed the building as their own. Yet the Cathedral has never been the property of any of them. It belongs to the people, assigned to them by King James III of Scotland in a charter of 1486.

Meanwhile, back at the ranch, there have been baptisms, confirmations, a wedding and funerals. We yearn for markers in the transitions of life. This is where the Church comes into her own, offering an embodied love through the rites of passage that give meaning to the passage of time and experience.

Another kind of embodied love is happening at the Findhorn Community which beckoned me earlier this week when the sun came out. In the swinging ‘60’s, Eileen and Peter Caddy and Dorothy Maclean found themselves without work.

With their children, they lived in a caravan on a wild and windswept shore. Feeding six people on unemployment benefit was almost impossible so they began to grow, from poor soil, amazing flowers, herbs, fruit and huge vegetables. Word spread, botanists and horticultural experts visited and the garden at Findhorn became famous.

The longing of these three friends was to 'bring heaven to earth'. Others joined them in that hope and now the Community commits itself to a sustainable, holistic way of life and a spacious spirituality. I whiled away some time in one of its smaller gardens. Bees were about, water tumbled over rounded stones, carrots and capsicums grew in the midst of late bluebells and old roses, lemon balm, sage and lavender. A lady wearing a floppy straw hat sat in a shady corner, back straight, eyes closed, calming her mind.

Two small and beautiful books of poems and prayers arrived in the post a few days ago. Written by  friends in New Zealand, Where Gulls Hold Sway and Be Still were companions on that afternoon of perfect light. The touch of new paper, the smell of ink and glue, the physical turning of the page with thumb and finger, the reading of words that read me…what is this heaven?

Later this month, at Stonehenge, a mysterious formation of stones in perfect alignment with the solar events of the Summer and Winter Solstices, there will be many peoples, who will gather in a spirit of togetherness, to celebrate the Light on the longest day of the year.

In the Southern Hemisphere, on the same date, the Winter Solstice will gift quietude, firelight, restfulness, while seeds germinate in the cold earth. Our ancient ancestors knew the sacredness of such times.

Memory recalls a visit with Clive, to a recumbent stone circle in Scotland with the almost unpronounceable name of Easter Aquhorthies. It happened many moons ago, in the early hours of a Summer Solstice morning when we were first in love. We cooked eggs on a makeshift stove for breakfast and then watched the pink porphyry, red jasper and grey granite stones, placed there over 4,000 years ago, change colour in the enchanted light. It seemed as if the whole world was open before us.

The earth spins around, time passes in minutes and millennia. We come, we leave, we meet again. One story.