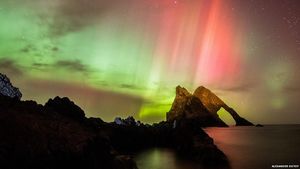 Travelling is in the DNA of most New Zealanders. Over a million of them live overseas and thousands holiday around the world each year. Families love nothing better than packing up the tent, caravan or camper van and hitting the road to enjoy some R and R. If you’ve got an iconic V Dub, all the better.

Clive and I are currently working in Scotland and have been missing the camping adventures that we enjoyed in New Zealand. A wee camper van has now been added to our life and after Easter, we set off on a tiki tour…

By the lakeside at Windermere on an April evening, the water mirrors the still sky. Trees are not yet in leaf. Buds await with quivering intensity. A few boats are about. The day has been one of hot sun and a cold wind. Late snow fell on Helvellyn in the early hours. The daffodils, so redolent of this rugged and wild landscape, are in their dying days.

Nesting for endless hours in the reedy bank is a cob Mute swan. His mate has been swanning around all day looking for food. Non-native Canada geese honk here and there. Conservationists say that they are compromising the habitat and need to be ‘managed’. Waterskiers on the lake fall into the same category.

William Wordsworth wandered here, lonely as a cloud o’er vales and hills. Daffodils inspired him to write some words which have earned themselves a place in popular poetic consciousness. He wrote better poetry though. Mystical, spiritual poetry, most of it, glimpsing divine unity in all living things.

When the rain teemed down and made the black slate houses blacker, the far distant mountains sang ‘the still sad music of humanity’ he wrote. When he felt the loss of that visionary light, his ‘Ode on Intimations of Immortality from Recollections of Early Childhood’, revealed that the memory of it never left him.

Samuel Taylor Coleridge, a friend of his wrote The Rime of the Ancient Mariner at the village of Grasmere, a place described by Wordsworth as ‘the fairest place on earth’. Like so many of his contemporaries, Coleridge was addicted to opium, commonly prescribed then for everything from a cough to vague aches and pains. He scribbled Kubla Khan after dreaming of the stately pleasure-domes of a Chinese emperor.

Another Lake poet, Thomas De Quincey wrote an autobiographical account of his addiction, Confessions of an English Opium Eater which became an overnight success. The opium dreams did not last for these poets of the Romantic School though. Such imaginings may have presented them with unique material for their poetry but it gradually took away from them the will and the power to make use of it.

There are two villages called Near and Far Sawrey.  Between the far and the near, is Hill Top, a 17th century farmhouse that brought the kind of childlike imagining I had put away. Beatrix Potter, the writer and illustrator bought the property with the profits from selling her first book, The Tale of Peter Rabbit, written first as a picture and story letter to cheer up a five year old boy who was ill.

Most writers have to learn to deal with rejection at some time or another and she was no exception. After several snubs from publishers, she finally landed a publishing deal for the story of this rebellious rabbit.

Potter’s own remarkable tale was that of a young woman who finally freed herself from demanding and possessive parents and achieved independence and fulfilment by her own efforts. The farm became her sanctuary, a place where she could draw, paint and write about lovable and villainous anthropomorphic animals and the triumph of good. Her stories are not only for little children.

And then on to rural South West Scotland and the ordination of a good friend. Farms and houses are  scattered far and wide in his new parish and I was reminded of the 18th century diaries of Norfolk clergyman, James Woodforde who led an uneventful and unambitious life except that for 45 years, he kept a diary chronicling the minutiae of life in the parish. His was an endearing pastoral ministry by all accounts, that went hand in hand with a liking for roast beef dinners washed down with copious amounts of claret and port and always shared with friends. His legacy is a jewel of a diary that illuminates the darkest of times.

Wordsworth worshipped at St. Oswald’s Anglican Church in Grasmere. He found it a comfortless place apparently. I can see him sitting on a hard bench, his feet on the earth floor which would have been covered with rushes, with the only heat coming from a tiny grate in the vestry, burning wood and charcoal. In his later years he warmed to the church when he wrote Ecclesiastical Sketches, a history and defence of the Anglican Church. He had grown to like its moderation and tolerance which he regarded as its strength, tempered through centuries of conflict and trial.

In the churchyard at St. Oswald’s, lie his remains and those of his wife Mary, sister Dorothy and his children, Dora, Thomas and Catharine. The poet Harley Coleridge, son of Samuel Taylor is also a neighbour. Alfred Lord Tennyson said that ‘next to Westminster Abbey, this to me is the most sacred spot in England.’ He may well be right.