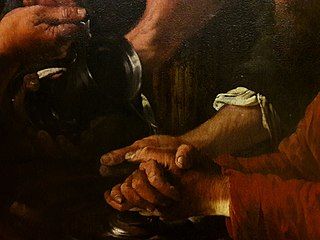 I don’t know about you, but I think I have washed my hands more in the last few weeks than I ever have before! Especially before the strict lockdown came in and I was out and about in town and with people. The message to do this washing of hands as a way to counter Covid 19 has certainly got through. And there are some funny video clips around where people have re-written parts of well known songs to incorporate this idea of washing. For instance, Neil Diamond’s ‘Sweet Caroline’:

‘Hands – washing hands
Reaching out – Don’t touch me, I won’t touch you’

And also a funny video clip from that great television series MASH. So things to make us smile in amongst all the difficulty of this time.

Washing hands. Well, in our gospel passage today (a long one I know) we come across someone washing their hands. Pilate. Trying to ‘wash his hands’ of his actions.

In my daily bible study notes with this passage, the author writes: ‘Plunge yourself into the story of Jesus’ passion and crucifixion, and find where you are in the story’. Well, I am choosing to concentrate on Pilate, with this ‘washing hands’ connection, and also because I lived with Pilate for several months, back in the early 1980’s!  Let me explain.

My late husband Mark was a great singer and musician. When I first met him he was lead guitarist and singer in a band. After we married and moved to Dunedin he had his voice trained and sang in the competitions, winning the Dunedin Aria competition one year. He was also involved in Repertory and Operatic productions and he played the role of Pontius Pilate in ‘Jesus Christ Superstar’. He practiced at home, for months, and so I ended up knowing his role inside out and backwards. I still know the words of the songs Pilate sang in that show.

And so on this Palm/Passion Sunday, I want us to spend time looking at Pilate’s part in this unfolding drama. This man who washed his hands in the hope that it would absolve him of his actions….He has gone down in history as the judge of Jesus's trial, and in turn he has been judged for that. Many regard him as weak, a coward, a man who crumbled under pressure. Think for a moment of how you regard Pilate.

Now, let’s just look at what has led up to the point of encounter between Pilate and Jesus. If you read the full passage (and I would encourage you to do so) we see that there was a plot against Jesus as many regarded him as a threat to the establishment of the time. Judas agrees to betray Jesus. The disciples eat the Passover meal with Jesus and in that he talks of one who will betray him, one who will deny him. The disciples are aghast at that. This story is very familiar to us. We can feel the tension building. The drama beginning to unfold. Jesus prays in Gethsemane, alone. An incredibly hard time for him. He is arrested. Taken before the Jewish Council. Accused of blasphemy. Peter denies knowing Jesus and is heartbroken when he realizes what he has done. And Judas is heartbroken when he realizes what he has done. The story we know so well is quickly unfolding, and we can’t stop it! And now Jesus is taken to Pontius Pilate, the  Roman governor under the emperor Tiberius.

Matthew’s account of Jesus’ appearance before Pilate and his execution follows Mark closely, but with significant variations.   As in Mark the trial before Pilate begins with the leading question: ‘Are you the king of the Jews?’ It could be easy for us to miss the gravity of this encounter: the major power of Rome, through Pilate its representative, confronts suggestions of an alternative power. Rome is a big deal.  The power imbalance is enormous.

And let’s remember for a while an earlier time when this term ‘King of the Jews’ was used. In the Christmas story the wise men went looking for ‘the child who has been born king of the Jews’. Herod got to hear about that and in his fear of a rival power, ordered the slaughter of all the children in and around Bethlehem who were two years old and under. These were tough times when any sort of perceived rivalry for power would not be tolerated by the Romans.

So, Jesus had caused a stir at his birth, and we see it again in our passage today, as he stands before Pilate. There were no human rights conventions then. An individual coming up against the power of the state was very vulnerable.   Are you the King of the Jews? Ponder that for a moment….

As the words of the song from ‘Jesus Christ Superstar’ go:

Jesus’ response to the question ‘Are you the King of the Jews’ can be seen as an ironic acceptance of the title. It also echoes his response to the High Priest who earlier asked him if he was the Messiah, the Son of God.  There too he said ‘You have said so’.  His responses, and then his silence, to both the High Priest and Pilate are infuriating and perplexing to them.

Matthew reworks the scene with Barabbas. It becomes Pilate’s initiative (not the crowd’s) to bring Barabbas into the equation. Choose Jesus Barabbas (Aramaic: son of the father) or Jesus (Son of God). The effect is to lay the blame squarely on the crowd. By inserting a report about the wife of Pilate and her dream, Matthew suggests that she, like Joseph and the magi of the birth stories, has a special connection with the divine. It could even indicate that he wants to exonerate Pilate. Washing his hands and declaring Jesus innocent might point in that direction. Matthew certainly points to the bloody consequences for Jerusalem and its inhabitants. The crowd say ‘Let the punishment for his death fall on us and our children!’ It is chilling.

So we get this sense that Matthew plays down Pilate’s responsibility in the drama, by introducing Pilate’s wife and her dream, by Pilate washing his hands, supposedly absolving him of any responsibility for Jesus’ death, by showing the crowd’s part in the story.   But, standing back from the picture, we cannot overlook Pilate’s role. Whatever game he is playing in the narrative, he does not escape responsibility.  The story cannot obscure the historical fact that Jesus was executed by a Roman official, on a Roman cross, as a political criminal. As one author puts it ‘There is no justification, historical or exegetical or theological, for reading the passion narrative as justification for anti-Judaism’.

Pilate knew that Jesus was not a criminal. He knew that the Jewish authorities were jealous of him. He had the crowd baying for blood, crying for Jesus to be crucified. He felt he was between a rock and a hard place so he had Jesus whipped and sent off to be crucified. He attempted to ‘wash his hands’ of it. I wonder how he lived with that decision.

In the show ‘Jesus Christ Superstar’, Pilate sings the following:

I dreamed I met a Galilean;
A most amazing man.
He had that look you very rarely find:
The haunting, hunted kind.
I asked him to say what had happened,
How it all began.
I asked again, he never said a word.
As if he hadn't heard.
And next, the room was full of wild and angry men.
They seemed to hate this man.
They fell on him, and then
Disappeared again.
Then I saw thousands of millions
Crying for this man.
And then I heard them mentioning my name,
And leaving me the blame.

This passion narrative is a hard read. What strength Jesus showed. What depth of faith and determination he had. Even though we know that resurrection lies ahead, in this space there is betrayal, desertion, sadness, heart-brokenness, guilt, regret, desolation, confusion, anger, injustice, mockery, death. All the things that are part of our life’s journey at times.

On this Palm/Passion Sunday of the church year, there is the choice of celebrating the triumphant entry into Jerusalem (Matthew 21: 1-11) where the crowd spread their cloaks and branches on the road and people called out their praises to Jesus. A high point. And there is the choice of concentrating on the passion narrative, which we have done today. I usually do a bit of both as there is the danger that we can celebrate the triumphant entry into Jerusalem one Sunday, and the next Sunday celebrate the Resurrection, without having experienced the hard journey between.  I always urge the congregation to attend either the Tenebrae service or the Good Friday service, in order to hear this story, to know the depths of it, and so better know the joy of the resurrection.

This year we cannot gather for such services, which is really hard. But we can read this passion narrative and reflect on it. And we can see how this narrative can resonate with different happenings in our own lives. Hard and tough times which seem so bleak we cannot imagine a better future. Yet God is not stopped by disaster. God is not stopped by human hatred or the powers that be. Even when evil seems to be winning, God is not absent. God is present in the midst of the disaster, sharing the pain, relieving the suffering, and reassuring us again and again that nothing is stronger than God’s love.

May we know the reality of that in our own living, and may we continue on this journey with Jesus – the one who brings us life in all of its fullness. Amen.