Moments: From Vézelay to Bethany 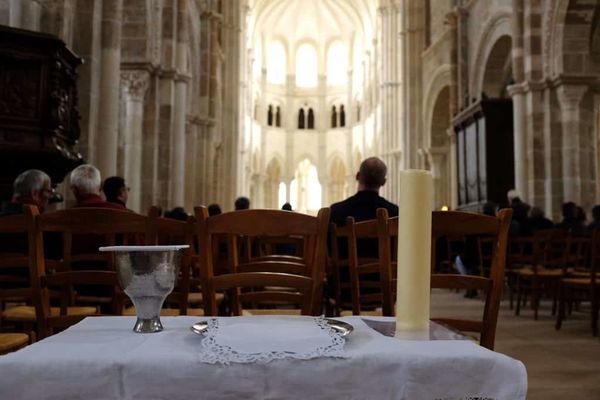 I recall waking up in the little 9th century village of Vézelay in France to the sound of bells pealing, swallows flying in and out of windows, people climbing up the steep hill to the glorious Benedictine-Cluniac church which crowned it, dogs barking, and voices happy. Why? What? "L'Ascension," the villagers said. I had quite forgotten that it was Ascension Day. La Basilica de Sainte Marie-Madeleine is a beacon of Christianity. as was her namesake, Mary Magdalene. That day it was full of pilgrims, believers, visitors. And in no time, I was singing with them, in the cool of the sanctuary, while outside the grapes felt the early day's hot sun.

Ascension Day was observed on Thursday, 21st May - the 40th day after Easter and ten days before Pentecost.  Although people in many countries across the world enjoy a public holiday on this day, notable exceptions are the United Kingdom, Australia, Aotearoa New Zealand, the United States and Canada. However, there was a time in England when all the village schoolchildren trooped to church on Ascension Day, sang a few Wesley alleluias and afterwards were released in a rush to play, ride bikes, do anything they liked.

Since Jesus' death, his disciples and companions had been on an emotional rollercoaster. There was the disappearance of his body from the tomb and then his unsettling and incredulous resurrection appearances in Jerusalem and Galilee. They had experienced the sadness of his absence and also the joy of his presence. It must have been a very disconcerting and bewildering time for them.

The death of someone we love is one of life's most difficult experiences. We have to adjust and adapt to a new way of living and being. We become vulnerable to the absence of our loved one because we so deeply desire their presence. Yet somehow, the connections remain. No longer near to us physically, the painful longing of their absence somehow keeps them spiritually near to us, and we still belong with them. As time passes, we gradually learn acquaintance with the invisible form of the person we have lost and the wounds of grief that we have endured, slowly begin to heal. In the rhythm and mystery of eternal love, absence turns into an awareness of presence.

Jesus instinctively understood the nature of loss and the ache of grief. He knew that he had to farewell his disciples and all who loved him. So he nurtured and encouraged them with words of hope which the gospel writer Luke records,

45 Then he opened their minds so they could understand the Scriptures. 46 He told them, "This is what is written: The Messiah will suffer and rise from the dead on the third day, 47 and repentance for the forgiveness of sins will be preached in his name to all nations, beginning at Jerusalem. 48 You are witnesses of these things. 49 I am going to send you what my Father has promised; but stay in the city until you have been clothed with power from on high.

Before, Jesus had spoken to the disciples about what was to happen, but they had not fully understood. So he chose to take them to Bethany, a place to which he withdrew on more than one occasion and which was also home to his dear friends Mary, Martha, and Lazarus. It was a place where the fullness of Jesus' divinity and his humanity came into sharp focus. In his raising of Lazarus, Jesus displayed his power over death. There was also the gift of a woman's anointing that he graciously received there, a few days before he died. In friendship with his three friends, he revealed himself as someone who took solace and delight in their human company. Bethany stood as a place of divine love, forgiveness and healing, of restoration of life, peace and justice, of hospitality and friendship and miracles. The disciples had been witnesses to these beautiful blessings.

Luke tells us that after blessing them, Jesus took his leave of these companions who had accompanied him on his earthly path. He is carried up to heaven to take his place with his Father. Jesus also took our humanity with him, drawing us into his nature, that we might become a blessing, as the body of Christ in the world; heaven's company on earth, living and working, praying and loving, with grace, in the places where the Spirit of Jesus is – in our hearts, in our homes, our workplaces, our communities, our churches, and in the whole of creation.

I think that Jesus' leaving was part of the blessing. The blessing could not have happened any other way than by his departure, by his letting go of the ones whom he loved and whom he would never stop loving but had to release into their own lives so that they could enter into the blessing and live it out on earth.

You and I know how the continuing story unfolds. The day will come for the disciples, when breath will fill their lungs as it never had before. With their own ears, they will hear new and startling words come to them. They will dream dreams and see the world ablaze with blessing. But they didn't know all of this and I'm sure that in the leaving of their teacher and friend, they probably felt an indescribable intensity of emotion, an awful, inner quiet. No more dropping in for bread and wine at supper, no more walks with Jesus or fish breakfasts on the beach and no more enigmatic conversations.

They could never have imagined what lay ahead. They lived in an interim time, where everything seemed withheld, the way forward still not fully revealed to them. Yet they did what Jesus asked of them. They returned to Jerusalem. In the temple, they worshipped him and blessed God. They stilled themselves. They waited patiently.  So must we.

In the leaving,
in the letting go,
let there be this to hold onto:

the enduring of love,
the persisting of hope,
the remembering of joy,
the offering of gratitude,
the receiving of grace
the blessing of peace,