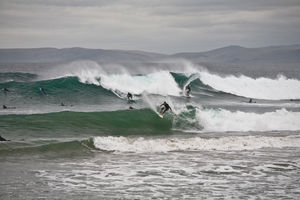 There remains then a Sabbath rest... let us therefore make every effort to enter that rest, so that no-one will fall.  (Hebrews 4:9)

France and New Zealand have two things in common. When I lived in Paris, a long time ago, suddenly in August everything became very quiet as many left Paris for the holidays. Here in New Zealand the same thing happens, but in January; everyone leaves for their batches (holiday home).

For those of us who live in the Southern hemisphere, it is a reminder that as we re-engage with work again, to see our engagement with the new work year as a marathon, rather than a sprint. What do I mean by that….

I was once a surfer, not a very good one I hasten to add, but I had been told it had a certain allure with the young ladies, and at 14, becoming more alluring to them was very important, especially if you were a scrawny shy looking fellow who needed all the help that was on hand possible!

Anyway surfers understood intrinsically something I now call ‘the wave theory of time management’. We didn’t call it that back then, as there were not many models or theories of management around, but it should be called that today, and I suggest it to every organisation’s personnel department! So what is it all about?

In South Africa, waves came in around sets of six waves. There was then a lull, and then on came the next six waves or so. In those first six waves, you grafted hard; it was intense and full on. But then came the lull and you chilled; looked at the beauty of creation all around you; you caught your breath, chatted to your friends, and let your inner voice catch up with you. Then on came the next set and it was back to grafting hard.

What I have called the ‘Wave Theory of Management’ actually was once called the Sabbath principle. God in the first page of the Bible, theoretically knew all about this principle, for having worked really hard for six days at making Creation, then chilled on the seventh. Ever since then, observance of the Sabbath was an important principle; that is until the last fifty years when our more hectic modern life-styles have made it redundant.

Now I am not a believer that the Sabbath principle means it has to be Sunday, but I do believe it is an important principle to leading a sustainable life. Alongside many work-psychologists today, I suggest that we are subtly becoming less human, that our work productivity is less, and our ability to read complex situations when they arise impaired, all because we don’t make the Sabbath principle part of our life. I know this for myself when I burned out for six months around 13 years ago from working too many long hours.

The Bible is not against hard work. In fact it understands how work offers self-esteem and well-being; but Christian spirituality equally encourages a sustainable led life, time for hard work, time for play, time for our spirit to be nurtured. If your life is cluttered with too much on, then you may get on by for a while, but in the end you will become less human, for yourself and for those you love.

Finally, here is another final reason to make sure the Sabbath principle is in your life. You may get by running fast for some period of time. But every so often, as though out of the blue, came a monster wave when we were surfing. We called it the ‘backie’ and it didn’t fit into any rhythm or pattern. If you hadn’t taken the time to take those moments of rest between sets, then you would never have the energy to get to the monster wave before it overpowered you as you desperately tried to swim through it. Likewise, in our life, the ‘backie’ can suddenly happen with the sudden illness of a family member,

Now that most of us are back from our holidays here in the Southern Hemisphere, be aware that the whole year stretches ahead of you. Discover a right cadence for yourself now before the monster waves of 2016 come towards you. Incorporate the Sabbath principle into your life, in whatever way that might mean for you.

I end with a quote from an old saint who once said, “if you cannot make solitude your friend, then you will never hear the wisdom of God for yourself or others...the voice of God that encourages and guides you, the inner voice that nurtures your soul.”