Living In A History 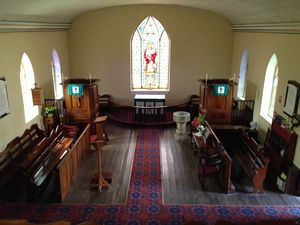 ...what we build will, over the years, shape how we understand God.[ii]
Anselme Dimier

In the few months since arriving in Stroud I have increasingly appreciated Saint John’s Church – this building to house the Church. At first sight, my attention is held by three features of the building: the high twin pulpits; the particularly small sanctuary; and the choir seating.

These features cause me to reflect on understandings of the Church and worship at the time of its construction, and where continuities and divergences may be found in both older and also in contemporary understandings and ways.

From my morning and evening prayer seat in the choir looking across to the tall tower for preaching or reading, my eye then travels to the rear of the church. Given the social context of the building of this chapel of the Australian Agricultural Company, I try to envisage what evangelical exhortations and morally improving messages may have been directed from the pulpit to the occupants of the convicts’ gallery. My imagination is fuelled somewhat by the piercing eyes and stern countenance of the chaplain William Macquarie Cowper whose photograph hangs in the foyer of the rectory.

St John’s brings to mind my affection and gratitude for two historical periods, and aspects of church architecture and the liturgy for which it was built. The first is the (largely unremembered) Anglican continuity with Benedictine monasticism. Although monks in their stalls have long been variously replaced by canons and clerks, and by cathedral and parish choirs, the singing and recitation of daily prayer and Sunday worship is carried back and forth from either side of the choir. Then as now, our answerability to each other whilst praying in such a manner remains apparent.

A second facet of my gratitude is being able to pray and shape liturgy in a church which pre-dates the neo-gothic revival in Anglican ecclesiastical architecture. Accompanying this is an absence of unconscious (or perhaps even indiscriminately followed) assumptions and directions in worship largely inherited from the determining architecture of that era. On a practical contemporary liturgical note, I am glad of a single-level sanctuary, rather than the later more usual multiple steps. The pulpits are high, though not the altar! Although I owe much to the neo-gothic influence on my earlier liturgical formation and practice, my more deeply rooted attraction is to the unadorned simplicity modelled by Cistercian monastic liturgy. The relatively undecorated Georgian style of St John’s is happily conducive to the prayer tradition which has most profoundly formed me.

A quotation on the Friends of St John’s Stroud website from architect Clive Lucas describes the church as “perhaps the finest and certainly most intact Anglican [c]hurch in Australia which predates the influence of ecclesiology.” To take gentle issue with this assertion, I would argue that any church of whatever era is an expression (whether by adherence, modification or rejection) of the dominant tradition of the time.

St John’s was built in the year of the beginning of the Oxford Movement and before the subsequent Catholic revival in the Church of England. The ecclesiology of our building thus reflects an earlier piety than that of both the Oxford Movement and also the associated 1845 Cambridge Camden Society, also known as the Ecclesiological Society, whose interpretation of ecclesiology was specifically related to matters of church building. The architecture of St John’s reflects a more evangelical understanding of the Church (ecclesiology) and thus pre-dates the predominant anglo-catholicism of the diocese of which it later became part.

Comments in the visitors’ book often make mention of the historic nature of the church and our other buildings, and also of St John’s being a prayerful and beautiful place. I like to hold this trinity of beauty, history and prayer together. An enduring gift of St John’s lies in enabling visitors and parishioners to allow this meeting of the past to find expression in the present, and to give hope for the future.

Week by week parishioners gather to celebrate the Sunday Eucharist, gathered at the sanctuary built for this purpose in 1833. The steady life-giving heartbeat of the church community is sustained in the daily offering of Morning and Evening Prayer, for the praise of God and to pray for the world and the Church. St John’s Church continues to be a place where the memories of successive generations are treasured, and a place which continues to symbolise the spiritual and community hopes of present and past Stroud people. I am glad to be joining this living history.