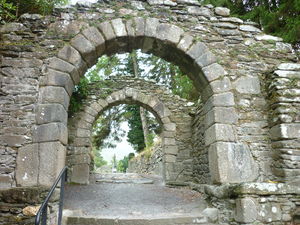 Earlier this year I was fortunate enough to spend a week in Greece visiting the places where Paul had journeyed. And then on to Ireland where we stayed at Glendalough, the most important centre of early Irish monasticism. The hermit priest, St Kevin, was one of the key figures responsible for the extraordinary growth of Irish monasticism. Sadly the monastery was partially destroyed by English troops in the late 14th century. We also spent time in France, where our congregation had come to birth in 1861 in Lyon.

Upon my return to New Zealand I was struck by the number of people who asked me what was the most important moment for me. I could not answer as there were so many wonderful moments. Now I have two tentative responses.

First, I was struck by the extraordinary faith that led people to build monastic cities in Celtic Ireland or great cathedrals and monasteries in France. Fortunately the weather in Ireland was mostly rain-free, so we had ample opportunity to wander around the ancient monastic city of Glendalough now in ruins, and to visit the three or four nearby churches also in ruins. I became very conscious of the faith and generosity that led people without the technology that we take for granted today to express in such a tangible way their belief and faith in God.

Then on to Paris, where we visited Sacred Heart Basilica in Montmartre. Construction began in 1875 and was finished in 1914.  This cathedral, full of African, Asian American, Oceanic and European tourists, witnesses to the revival of Catholicism after the persecution of the revolutionary era, and the excesses of the Second Empire and Paris Commune. Immediately behind the basilica is the older St Peter of Montmartre built in the 9th century on the site of an ancient temple dedicated to Mars. When we visited it was remarkably free of tourists, and its Cistercian-like simplicity was in stark contrast to its grand neighbour. It was possible to feel an extraordinary sense of relationship with those who had gone before me.

From Paris it was but a short train journey to Chartres to visit the Cathédrale Notre-Dame de Chartres, now a UNESO world heritage site. The cathedral was completed in 1250, the fifth church to be built on that site. Four previous churches had been constructed there since the 4th century. Its artistic splendour means it is easy to see why it is a UNESCO heritage site. But that same artistic splendour spoke to me of the loving faith that that was present behind the wonderful stained glass windows, and the amazing statues and friezes that adorned both the exterior and interior walls.

And then on to Lyon where we spent some time in the Cathedral of St John the Baptist, completed in 1476, and again constructed on the site of a more ancient church where St Irenaeus had been one of the early bishops. Lyon is also where we find the Church of St Nizier, another extraordinary example of a Gothic cathedral, and constructed on the site of an ancient temple honouring the Roman god, Attis. More recently in the 19th century Suzanne Aubert was baptised in the church of St Nizier.

Because Taizé is close to Lyon we went there for our Sunday liturgy. The monastery of Taizé was built in 1940, not far from the ruins of the famous monastery at Cluny. The summer season which sees enormous numbers of pilgrims at Taizé was over but still there was a large congregation for a prayerful and simple Eucharistic celebration.

Second, the experience of being in these wonderful cathedrals and monasteries thronged with tourists and fellow Christians from all over the world allowed to appreciate more deeply what ‘the communion of saints’ means. Visiting these places reminded me that we are part of something much greater than our own particular parish. We are part of a tradition that stretches back through the centuries, that stretches outwards to all the world’s peoples, and touches us within as we stand in awe at the faith of previous generations.

It never ceases to amaze me that the wonderful awe-inspiring cathedral at Chartres was constructed mostly between 1194 and 1250. Fifty four years!! It took about three years to sort out about one kilometre of State Highway 1 that runs through Warkworth, and this in the age of computers, trucks, bulldozers etc. It is amazing what faith can mean.