The Gifting of Gossamer 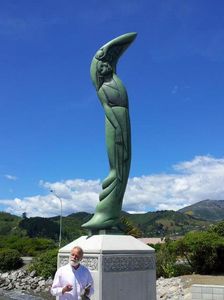 There was a dandelion clock in our garden on Sunday. Only one. A delicate timepiece.

As a little child, I remember being told, “you can tell the time by the number of puffs you need to blow the seed heads into the air.” Very different from hearing the sound of a ticking clock on the mantelpiece, marking the linearity of seconds, minutes, hours, days, years.
Not under the burden and control of space and time like us, I watched the wild Southerly wind carry the gossamer seeds to different shores where the circle of life could begin again.
I like to think that this is what will happen to our souls when we die. Transfigured, we will live within a circle of eternity.
I ran through summer fields of golden dandelions when I was young and carefree with only thoughts of lemonade and ice-cream. To some though, these flowers are weeds, to be cut down, rooted out. Tell that to the United Nations Food Programme where dandelion leaves are an official nutritious food for people who hunger to live.
Writers, photographers, artists from all over the world – radical, progressive, middle of the road, anarchic - post their own take on current news, “not always covered well by the corporate-run media” on www.dandelionsalad.wordpress.com. A quotation from one of the greatest sages and scholars of ancient Judaism, Rabbi Hillel, known for his kindness, gentleness and concern for humanity and thought to be a contemporary of Jesus Christ, heads up The Golden Rule of the website: “That which is hateful to you, do not do to another...the rest (of the Torah) is all commentary, now go study.” Quite. This free press is food for thought.
The new bronze statue, Dance to the Music of Time, sculpted by New Zealander, Terry Stringer ONZM, tells the story of the Nelson region's people and history. He crafted The Risen Christ in Christchurch's Cathedral Square, the Grand Head in Wellington and the Mountain Fountain in the front of Auckland's Holy Trinity Cathedral. This latest creation attracts the art of controversy.
Positioned at the gateway into and out of the city, Dance to the Music of Time, also looks out over the tidal estuary of Nelson Haven and the sheltering long barrier spit, Te Tahuna a Tama. The presence of Tangata whenua in this area spans some 600 years of time. They reverenced and respected the Haven as a rich food basket. Four figures on the sculpture represent the seasons of the year. Summer picks early fruit, Autumn makes wine, Winter's woman carries a kete of fish, Spring is a small child's face.
A sense of timelessness suffuses the story which the sculpture seeks to tell. Its softness and balance produces the most powerful and tender music for the dancing mind and the freeing of the spirit. “When I let go of what I am, I become what I might be,” mused the sixth century Chinese philosopher, Lao Tzu. Words of another wise man, John O'Donohue, engage my thoughts:
“We put terrible pressure on our minds when we tighten them or when we harden our views or beliefs...sometimes the best way of caring for your soul is to make flexible again some of the views that harden and crystallize in your mind; for these alienate you from your own depth and beauty.” (O'Donohue 1997 p. 135)
I enthuse about a dancing theology and think fondly of Dr. Marcella Althaus-Reid who mentored me during my PhD studies at New College, The University of Edinburgh and became my friend. She died in 2009, leaving a formidable legacy of very radical, inspirational and controversial theology. A book of essays was later published in her honour called, Dancing Theology in Fetish Boots. I imagine she loves that title.
“The wind blows where it wills, and you hear the sound of it, but you do not know whence it comes or whither it goes; so it is with every one who is born of the Spirit”, says Jesus. The power and the fragility of gossamer seed heads. The journey to new life. Of such is now. Of such is eternity.
©Hilary Oxford Smith
O' Donohue, John, Anam Cara, Spiritual Wisdom from the Celtic World, (Great Britain: Bantam Press 1997)
Holy Bible, Revised Standard Version St. John 3:8
Image: Dance to the Music of Time and Terry Stringer,   www.facebook.com Public Art in Auckland
Share
Tweet