From Glastonbury to Iona 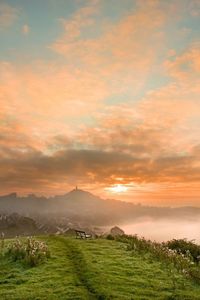 The ferry left a misty Oban and arrived at the jetty on Iona where the weather turned bright. Wild and remote, the villagers of this tiny island in the Atlantic Ocean know how to walk against the unbridled wind. Yet in what has been a curious summer of weather, the sun shone for longer than a day and my skin glowed. Freckles became uncountable.

I discovered coves and caves for the very first time, dreamt of ancient legends that spoke of truth and possibility, walked across fertile flowered machair and awoke at dawn to the rasping sound of grey and chestnut plumaged corncrakes, secretive visitors from Africa. They opened my eyes to the illusory rising of two suns.

The Bay at the Back of the Ocean, the Hill of the Angels, the Gully of Pat’s Cow, the Port of the Marten-Cat Cliff, the White Strand of the Monks and tide-dancing for tiny polished beads of serpentine at Columba’s Bay, beckoned. Ragged robin, St. John’s Wort, bog myrtle and orchids grew in a landscape of translucence and light.

I stayed at a small island hotel. The bread-maker rose early in the morning to prepare her gift and the smell of earth’s fragrance wafted through the house. Fresh organic bread, rich and moist, full of seeds and nuts, carrying the gentle life and death secrets of grain.

The Abbey remains the summer-hour destination for coach weary day-trippers and those escaping the noise and grime of city streets and isolated urban spaces. They come to a remote place and feel at home. At sundown, the island gives itself back to resident dwellers while kittiwakes and sea eagles, like sentinels, soar around this thin place.

When St. Columba made his bittersweet landing on Iona’s shore, the story goes that he chose it because he would not be able to see his beloved Ireland. Drawn to a world beyond his knowing, Columba’s home-sickness must have been like the ache of an uprooted plant with only courage and faith to hold it up. He became grounded in new soil.

And so on to the opalescent mist of Glastonbury, popularly known for its music festival of Vee Dub tents, welly boots, boho, wild flowers in the hair, mainlining acts and mud.

This is Camelot, the Isle of Avalon, a place of disappeared kingdoms, myth, intentional well-being, religious and New Age pilgrimage. Sitting amongst the ruins of Glastonbury Abbey, in the drizzle of a mild September day with the ‘once and future’ King Arthur and his wife, Guinevere, reputedly lying buried nearby and with centuries of fireside storytelling warming my imagination, I felt as though I was searching for the rainbow’s end.

Legend has it that Joseph of Arimathea, the great-uncle of Jesus, who placed his nephew’s body in the tomb after the Crucifixion, later made his way to Glastonbury with eleven companions, bringing with him the Holy Grail, the cup used at the Last Supper.

Glastonbury was once an island. It can be seen from a great distance because of the Tor, a hill of some 500 feet, crowned by the 14th century Chapel of St. Michael. Joseph is said to have buried the chalice near the Tor and to have founded the first Christian church in Europe at this Place of Dreams. Resting on Wearyall Hill, he stuck his staff into the ground where it miraculously took root. The Glastonbury Thorn blooms each Christmas.

Great saints over the centuries, Dunstan, Columba, David, Bridget, Patrick and others have journeyed to this sacred and mysterious place as have so many of us ordinary mortals before and since, because not only did Joseph of Arimathea walk there but also Jesus himself.

The mystic, artist and writer, William Blake toyed with that possibility when he penned in his poem, Milton, some verses which became known as the hymn Jerusalem,

And did those feet in ancient time
Walk upon England's mountains green?
And was the holy Lamb of God
On England's pleasant pastures seen?

What happened in this place of unravelled threads?

Richard Bach, author of Jonathan Livingston Seagull wrote, ‘not being known doesn’t stop the truth from being true.’ A rainbow coloured the Avalon sky in the late afternoon. I knew that I might never find its beginning or its end. It matters not.