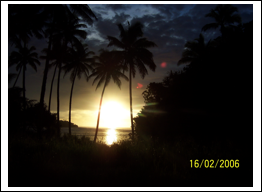 The light shines in the darkness –and the darkness has never put it out. John 1:5
The family of Kula, the parrot, has flown around the Fiji coastland and bush for as long as anyone can remember. The ancestors of Mongoose travelled from India with people who came to work on the sugar plantations.
Kula and Mongoose are friends. Some folk are surprised because Kula and Mongoose are very different. But why shouldn't they be friends?   They have grown up together. They talk to one another. They have different gifts and they help one another in the green valley where they both live.
Kula makes Mongoose laugh. Kula is bright and colourful and can fly and tell Mongoose what she sees. Mongoose is alert and quick as he slips quietly through the bush and through the fields. He has an ear to the ground. Mongoose never touches Kula's eggs. He protects them. He warns off any likely predators.
One day in her flights Kula notices some puzzling activities in a nearby town. She returns to tell Mongoose some very strange stories.   In the town there is much more buying and rushing around. The shops are decorated with shiny paper and lights. Some people are drinking from cans and brown bottles. Others are singing loudly in the little wooden church.   In the valley Ana is busy with a sasa cleaning her little home. Old Jone seems be carrying more dalo from the plantation than usual.
What is this all about? The two friends decide to try to find out. They decide to ask the bullock who is thought to be very wise. His broad shoulders have carried more burdens than the heavy plough yoked to his neck in the cane fields. He listens carefully to the friends. “It must be Christmas," he says at last. “But what is Christmas?” the friends reply.   The bullock shakes his heavy head from side to side in the effort of trying to remember. He speaks slowly. “When I was just a calf, it was told me that a loving Child once lay sleeping in the place where bullocks were eating. If you find the Child you will find the meaning of Christmas. Go and look for the Child!”
So the friends set out, the Mongoose travelling close to the ground the Kula flying above. They set out to look for the Child. They go to the place where the bullocks are fed. There is no Child. They search until the sun went down as a ball of fire into the Pacific Ocean and darkness quickly envelops the valley. The friends are tired, hungry and disappointed.
Then they come to a little well-worn path leading to a humble wooden house.   There is a smell of cooking as roti, turned with nimble fingers and the edge of well worn sari, is being cooked on a tiny paraffin stove. An oil lamp has been lit and casts a circle of gentle light on the thick green grass in front of the house.
A boy called Shiu is sitting by himself on the veranda steps.   The friends watch and suddenly into the circle of light steps a girl called Mere whose family had always lived in the valley. She carries a basket of golden pawpaw as a gift.
Soon two children, Shiu and Mere, are sitting on the veranda steps, eating roti made by Shiu's Grandmother. They drink from new coconuts. They are talking and laughing together. Kula and Mongoose wonder at the happy scene. Strangely unafraid, the two creatures draw nearer to the circle of light. Both Kula and Mongoose draw nearer still and are caught in the lamp light.
The two children notice. Shiu and Mere sit very still and smile. The children tear their soft roti and throw pieces to the creatures which come and eat. Then the children hold their breath.   Kula, flitting green and red feathers, begins a spiralling dance of joy and as if awed, in deep respect, Mongoose sits upright on his haunches.
Mongoose and Kula rest so peacefully in the green valley that night. Their search is over. They know they have found the meaning of Christmas in being drawn to that circle of light - in being welcomed by the children into a circle of loving and sharing.
A baby is born in the valley that night. Old Jone, coming late from the plantation, looks up at the starry heavens and gives thanks for all the children and people living in the green valley and beyond. He knows there was a place for everyone.
In the morning, Christmas morning, the frangipani tree with star shaped flowers blooms so brightly. It seems as if heaven's stars are caught in its branches.
On the beach, the great white reef heron stretches her wings.   Like a Seraph she rises in the air and sweeping along the coast, she cries, “Peace! Peace! Peace!” Flying across the waves of the Pacific Ocean, she cries out “Peace” in all the languages known to creatures and to people.
VAKACEGU*SHANTI*PEACE
Shiu (a Fijian of Indian descent) and Mere (an indigenous Fijian) represent the two major ethnic groups in Fiji.   In Fiji there are often great friendships between the races.
Sue Halapua is an Anglican priest who has lived for many years in Fiji.  Her story is written for Tiahli, all the Children of Fiji and all who work for Peace.
Image: Fiji Dawn by Anthony Halapua
Share
Tweet