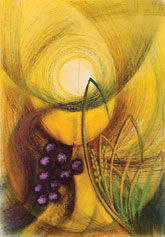 1.
An English cathedral on a summer Sunday morning.
Sunlight shafting downwards through the stained glass
onto the choristers, whose ethereal music soars heavenwards
to the high vaulted roof above.
The bishops and clergy are bedecked in their finery,
rich reds, green and gold,
dressed as if to attend
a Celebration.
The service proceeds to its climax,
the congregation moves slowly forward,
slotting into the spaces at the altar rail
to receive the bread and wine,
then tiptoeing back to their places
humbled, yet uplifted.
2.
A Scottish Presbyterian Church on a Sunday morning
at the sacred hour of eleven.
The congregation gathers early.
The atmosphere is grave
as they sit in silent expectation.
The elders enter, dressed in sombre colours,
(save for one, an exiled Anglican
in whose memory the idea of celebration still lingers on,
and whose red pullover glows like a living ember
in a dying fire).
The service is solemn and dignified,
sounding the twin themes of death and resurrection
(though a stranger could be forgiven for thinking
that to many present,
only the first half of the message has got through).
The miracle is
that God is able to break through
the trappings and the ceremony
and reveal Himself
to those who seek Him.
3.
A Methodist Chapel, small and friendly,
still with a historical hangover
from the temperance movement,
so serving strictly non-alcoholic wine.
And since that liquid
has no anti-bacterial properties,
the common cup has been reluctantly discarded
in favour of glass thimbles.
The service is simple but expressive,
each person invited to the table, pew by pew,
coming forward as a symbol of freewill,
kneeling as a sign of unworthiness and reverence
to receive the bread and wine.
And afterwards, still kneeling,
words to strengthen and encourage
spoken by the Minister as he sends his flock
back into the world to share with the world
what they have received.
4.
Four friends meet in a house for a meal,
brought together by a common grief.
One, a non-believer, brings as a gift
a newly baked loaf of bread.
Another brings a bottle of wine.
The meal is eaten, the wine is drunk,
and memories of those not present are tenderly recalled.
There is talking and listening,
sharing and caring.
God is never mentioned,
but He is there.
©Margaret Lyall
Image   Bread and Wine, Sr. Mary Stephen CRSS
Poetry, Bread, Wine, Communion, Cathedral, Church, Chapel
Share
Tweet