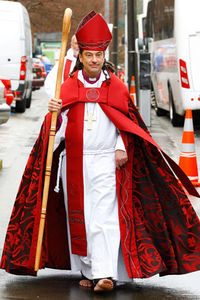 Cathedral high holy days are like magnificent theatrical productions but you need to be able to see the action to appreciate them.  Squashed in just beyond the choir and slightly short of the sanctuary, my view of the ordination of Justin Duckworth, the 11th bishop of Wellington was stymied, so I had plenty of time to muse.
Two rows in front of me was a bevy of bishops.  Most wore a mitre, the church equivalent of a crown.  Lest you think I'm overstating the case, the service had been billed as an enthronement.  With that kind of label it's hard to avoid royal overtones, which rather set me to wondering about a Hebrew story and a book about archetypes that I'm reading.
Samuel had a specific role in ancient Israel.  He was a judge, a wise person steeped in deep spirituality who took the lead in the country.  As Samuel got older, the people decided they were fed up with judges and wanted a king to govern them just like their neighbours had.  According to the story, God told Samuel to give the people what they wanted even if the idea was flawed.  A rather spacious approach.
Loud applause jolted me out of Israel and back to the cathedral.  The service had moved on and Justin was headed for his cathedra, the bishop's throne, which was conveniently placed right opposite me.
Why is it that the monarchy has such appeal I wondered as he struggled onto the carved chair, his trademark bare feet an interesting juxtaposition to the luxurious mitre and cope.  And how is it that despite clamouring for change in the church, we've never dismantled this quasi royal system?
Bruce Tallman, author of Archetypes for Spiritual Direction has some insights.  He says the sovereign archetype is one of a group of primal, unconscious, universally present forms that influence our imagination, perception and thinking, and through these, our external behaviour.   The sovereign, along with other symbols, is rooted in the universal history of humankind and has the ability to grab us in a startling ways, far beyond our conscious control.
Huge expectations for change have been placed on this new bishop from the diocese and his bishop colleagues, but neither group have been explicit about the change required.  That uncertainty might be discomforting but wise in an evolving spiritual landscape.
Even if people were clear, change in the institutional church is not easy, as the existing bishops know.  Not necessarily because everyone is a stick in the mud luddite but because the church, its mystique, symbols and rituals, are a portal to what lies deep in humanity.
Making changes to the church has an impact on the spiritual life of a community, often in quite unexpected ways.  This has been graphically illustrated by the Christchurch community in their reaction to the earthquake damaged cathedral and plans for its future.  How the sovereign operates has an impact on the community, even if in the good times that same community feigns disinterest.
The sovereign, says Tallman, is primarily about ordering and organizing; creating a realm of harmony and peace, and holding the centre so that new life and growth can flourish in others.  If he's right then a bishop's role may, by offering a non-restrictive inclusivity, be much more revolutionary than is usually played out.
Creating this realm will not be achieved by being a change agent in the material sense through engineering programmes and specific initiatives.  Instead, it will come through developing and protecting creative space that can hold and encourage the spiritual exploration of us all, something difficult to achieve in the church right now.
For a community activist to step into a sovereign bishop role, when he already has strong ideas of his own about the form and direction of change, could take some fancy footwork.
Share
Tweet