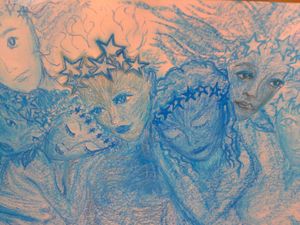 It is a bright, blue, winter morning in the Southern Hemisphere and the winter solstice stretches our imagination.
In the Northern Hemisphere, the summer solstice heralds the longest day of light. Youthful midsummers were filled with heady playtimes, swimming with dolphins and dancing with seals, searching for crabs and other sea creatures in rock pools…our footsteps and shadows sending them into hiding.
We gathered pink pearly shells and driftwood from the strandline of the beach and bedtime was hours away.
At night it was light and from the bed in my grandparent's house, I could look through the open curtains to the ocean and watch the midnight sun. Golden calendula marigolds grew in abundance in their garden, the petals adding colour to home-made butter.
Midsummer is known as St. John's Day in the Christian Church. It is said that John the Baptist was born on the 24th June.   Feasting on wild honey and locusts, he spoke of the coming of the Messiah. Not for him the celebration of his death day or martyrdom. Rather, a feast of the nativity, like Christmas, at Midsummer.
As the days shorten in New Zealand, it is still lighter at the winter solstice than I remember in my homeland. Daylight there was pale and fleeting with remnants of warmth. The sun set early in the afternoon and birds flew towards the shelter of trees to roost through the longest night. The fire kept us warm around the hearth. We shared stories and my grandfather, John, the fisherman, would snooze. The fire never went out.
I am told that my ancestors carefully 'smoored' the fire in their croft by making a circle with the peats. The first was laid in the name of the God of Life, the second in the name of the God of Peace and the third in the name of the God of Grace. The circle was then covered over with enough ashes to subdue the fire but not extinguish it.
The Scottish poet and writer, Kathleen Jamie writes about Light and Darkness. She believes that Darkness has been too much maligned, not least in Christian theology. 'Because of the metaphorical dark…we are constantly concerned to banish the natural dark...'
So with rucksack on back, she sailed from Aberdeen to the whale-shaped Orkney Islands in search of 'real, natural, starry dark'.   The chambered burial mound of Maes Howe, built around 2700BC, drew her into its mystery.
Around the time of the winter solstice, the midwinter sun rises from the Hoy Hills. As it sets, its rays strike the nearby Neolithic Barnhouse Stone, perfectly aligned to the entrance of Maes Howe and the tomb's dark passageway becomes illuminated with light.
Clouds clouded her mystical experience though. She also found the tomb filled with artificial light as surveyors mapped the walls with lasers so that they could investigate worrying cracks in the stone. On her return to the mainland, she could not even find the natural dark out at sea because of the lights from small coastal settlements and dazzlingly lit oil rigs.
'For five thousand years we have used darkness as the metaphor of our mortality...we have not banished death, but we have banished the dark. We have light, we have oilfields and electricity and lasers. And by the light we have made, we can see that there are, metaphorically speaking, cracks. We are doing damage. The surveyors poring over the tomb are working in an anxious age. We look about the world, by the light we have made, and realise it's all vulnerable, and all worth saving, and no one can do it but us.'
Often we want to look away from the brokenness around us in the world because we are afraid that we might be swallowed up by the dark. Yet the life of the Divine is within the dark. The secret and hopeful work of winter has already begun deep in the cold earth.
In New Zealand, snow has fallen in the high country and it is almost time for our MÄori brothers and sisters and those who respect and participate in their culture and traditions, to celebrate the MÄori New Year. It will begin on the 28th June, when the new moon follows the rising of Matariki, the Pleiades, or Seven Sisters star constellation in the Southern skies.
This ancient and spiritual festival plays out across our land with the revival of celebratory events of culture, language, spirit and people. Thankfulness is expressed for the gifts of mother earth and for the land on which we live and which sustains us. Our ancestors are remembered with loving respect. Lengthening days of light, heralding growth, change and new thresholds to cross are hoped for.
When Kathleen Jamie returned home from her journey of seeking the dark, she wrote,
'...we were going out for dinner. Our friends' cottage was inviting in candlelight, and the curtains were open to show black night pressed against the windows. In the warm light, we…drank a toast, because tonight was midwinter's night, the night of the complicit kiss, and tomorrow the light would begin its return.'
In the places of winter's passage, may the long dark nights shelter us.
In the places of summer's passage, may the long days of light refresh us.
©Hilary Oxford Smith
References
Kathleen Jamie, Findings, (Sort Of Books 2005)
Image
Seven Sisters, Jennifer Sea
Solstice, Winter, Midsummer, John the Baptist, Light, Darkness
Share
Tweet