Any Where and The Beloved Disciple 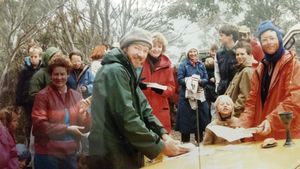 the bonnet of a car in Mount Ginini’s mist, a cathedral or

a homestead, or beside a hospice bed when time and breath

are short; even inside cinder block and razor wire; any where

is where enough for us well-meaning clumsies hungering

after more than scroggin for The Track, who gathering brave

his Triduum to feast upon the fullness of his empty tomb;

and feasting find ourselves – each one – as the Beloved Disciple

gathered and in-folded to the hem of his eighth day

This has allowed the evangelist to ‘invent’ an enigmatic character: ‘the Beloved Disciple’. From the viewpoint of strict historical analysis, the Beloved Disciple is apparently guilty of criminal negligence: when Jesus tells him unmistakably who the betrayer is (‘the one to whom I give this bread…’ 13:26). The Beloved Disciple does nothing at all to change the course of events.

It is necessary to look through another lens.

There is a venerable Hebrew tradition that goes at least as far back as the Book of Deuteronomy, that all the future generations of Israel were already present as witnesses to the Exodus/Passover and God’s definitive revelation on Mount Sinai, the core events of Israel’s collective memory. Each generation is thereby invited to see, with the eyes of faith, what their predecessors saw – and so enter into it for themselves. While clearly not historically possible, the effect is nevertheless dramatically compelling.

Again and again, the audience of the national assembly is reminded that they have seen…the portentous events that Moses is rehearsing. At one remove, the members of the historical audience of the Book of Deuteronomy  are implicitly invited to imagine what their forebears actually saw, to see it vicariously. The midrashic notion that all future generations of Israel were already present as witnesses at Sinai is adumbrated, perhaps actually generated, by this rhetorical strategy of the evocation of witnessing in Deuteronomy.[2]

This added depth to an article about the Beloved Disciple, published in 1983 by Margaret Pamment.[3] Her article enabled me to view John’s ‘Beloved Disciple’ as a rhetorical creation, part of the Johannine ‘evocation of witnessing’. The Beloved Disciple becomes our entry point, our ancestor in the faith, the one in whom we were actually present and experienced these things.

My poem suggests, first, that every Eucharist is a participation in Jesus’ historic Triduum (a different sort of ‘track’). Further, that my twenty-first century participation in a Eucharist transports me into the historic Last Supper, as the Beloved Disciple in whom I am historically present but unable to change the course of events that night because historically they have already run their course.

My poem suggests, secondly, through the imagery of ‘the eighth day’ that every Eucharist transports me and all faithful participants eschatologically into the Messianic Banquet.[4]

Any where is where enough.

[1] Jesus is frequently in Jerusalem, whereas in Matthew and Mark, he arrives there from Galilee for the first time on Palm Sunday, after extensive ministry in the north of Galilee. Luke records one single visit before Palm Sunday, when Jesus was twelve years old.

[4] The ‘eighth day of the week’ refers to an ancient Christian liturgical practice, inextricably related to Christian identity, which yearned for ‘the eighth day’ which ‘opens toward what cannot be reached simply by more days like those of the seven day weeks we have known…opening toward the day beyond days, toward the last day of God.’ (Gordon W. Lathrop, Holy Things (1993), pp 36 – 43.