A Sonnet for Trinity Sunday 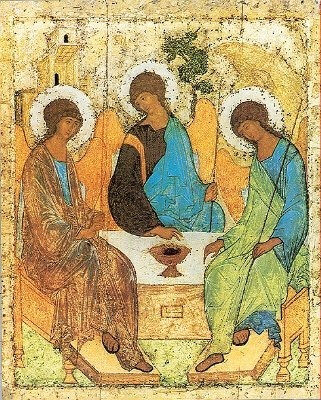 In the Beginning, not in time or space,

But in the quick before both space and time,

In Life, in Love, in co-inherent Grace,

In three in one and one in three, in rhyme,

In music, in the whole creation story,

In His own image, His imagination,

The Triune Poet makes us for His glory,

And makes us each the other’s inspiration.

He calls us out of darkness, chaos, chance,

To improvise a music of our own,

To sing the chord that calls us to the dance,

To sing the End in whom we all begin;

Our God beyond, beside us and within.

©Malcolm Guite
Image Icon of The Trinity, Rublev
This sonnet was first published in Sounding the Seasons: Poetry for the Christian Year, Malcolm Guite